Sure, if you’re into that kind of thing. (Photo: Screencap)

Today, Facebook hosted a big presser to reveal “what we’re been building.” This prompted breathless speculation but, much to our dismay, the big reveal was not Facebook for cars, introduced by Hasselhoff in full Knight Rider getup. Instead, it was “graph search.” Not to be confused with “web search,” it’s a better way for Facebook to leverage all the personal data you’ve willingly turned over.

Okay, to be fair: This probably isn’t the Facebook messiah, but it does sound like this’ll give users even less reason to ever leave the platform. Sorry, GOOG! Using the graph search tool, you can now search among your friends for Harry Potter fans, or for pictures of their trips to Budapest. It’s user engagement as quicksand, basically.

The blog post announcing the feature (currently in beta) explains

Graph Search will appear as a bigger search bar at the top of each page. When you search for something, that search not only determines the set of results you get, but also serves as a title for the page. You can edit the title – and in doing so create your own custom view of the content you and your friends have shared on Facebook.

At the press event, Mark Zuckerberg got up on stage and made the point that (via the Verge): “Facebook is a community and a database of people’s lives.” Once upon a time–think 2005–that database was small enough you could basically search for single Baptists from Georgia on your college campus and just scroll until you found someone who looked cute.

But as the site has grown, that’s become basically impossible–even as Facebook holds more and more data on every individual user. Until today, if you wanted to round up all your L.A.-based buddies who might want to join you at a Bruce Springsteen concert, you’d’ve probably been better served just sending a mass email asking for takers. Graph search is meant to change that. Said Mr. Zuckerberg:

“We are not indexing the web. We are indexing our map of the graph, which is really big and constantly changing. Almost a million new people every day. 240 billion photos. 1 billion people. 1 trillion connections.”

According to the blog post, that means that “With Graph Search you combine phrases (for example: “my friends in New York who like Jay-Z”) to get that set of people, places, photos or other content that’s been shared on Facebook.”

Facebook is also well aware of the fact that people want to get laid. Zuck noted that one of the things you can search for is “Friends of friends who are single men in San Francisco.”

Before anyone flips their lid over privacy, Zuck says you’ll be able to search “only what has been shared with you,” so if your love of Guns and Roses is visible only to friends and family–or if you’re a member of the Zuckerberg family who wants to talk about Poke–don’t worry, your secret is as safe as it ever was.

How will Zuck’s foray into search affect Facebook’s partnership with Bing? Everything’s peachy if you ask Menlo Park. When the social graph doesn’t have an answer to your question, the Microsoft-owned search engine–already the default result for web search on the service–will deliver whatever your friends can’t. But he’s happy to talk to Google, says TechCrunch, who quotes Zuck:

“I would love to work with Google. When we did our Bing web search integration we were very public about the fact whet we wanted to make search social in general… it wasn’t something I just wanted to do with Bing.”

Unfortunately, investors don’t exactly seem over the moon: FB shares could certainly be worse, but it’s not headed in the right direction, either. And with new Myspace opening to the public on the same day like some ghost of Internet failures past, one wonders whether graph search is really enough to solve Facebook’s woes. 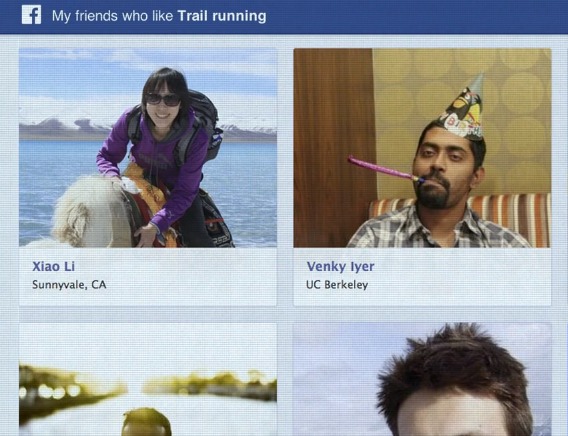