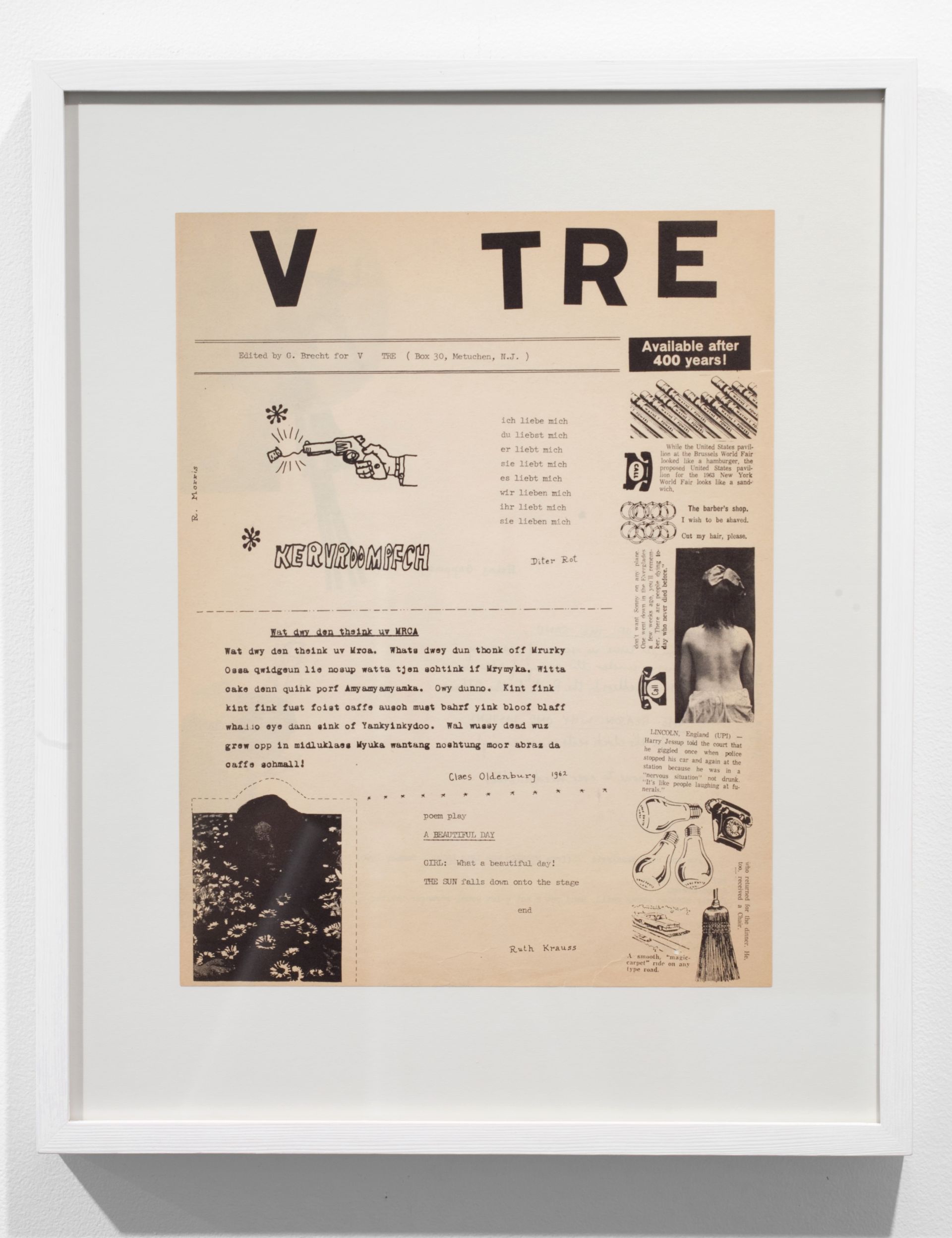 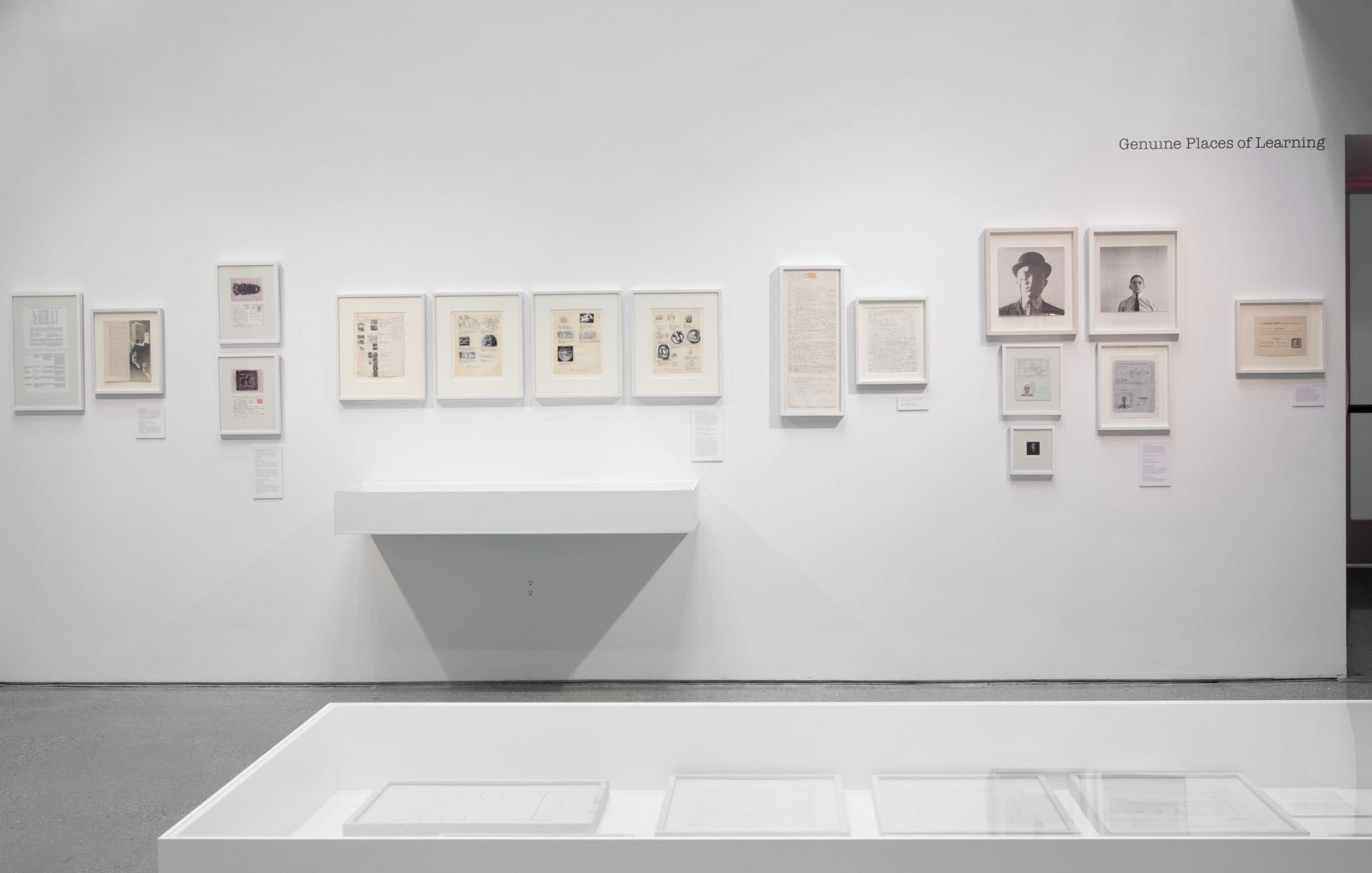 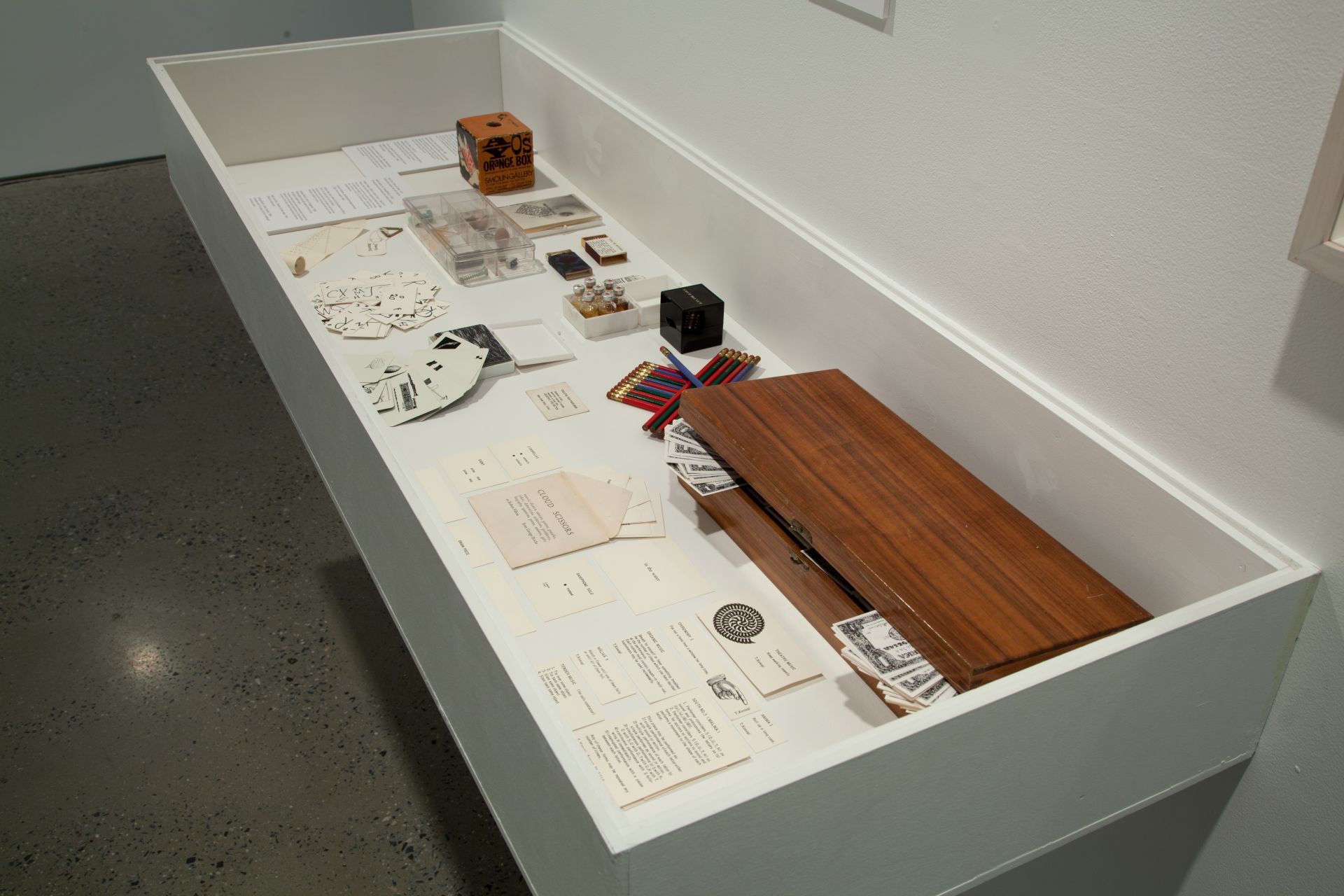 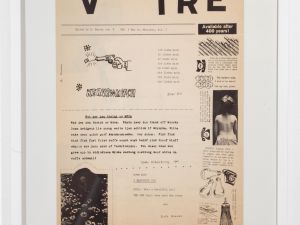 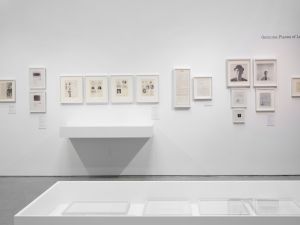 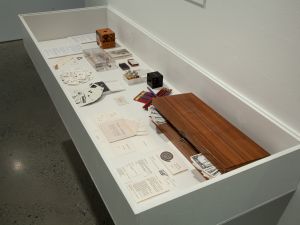 The composer John Cage proposed that everyday objects and actions could be art. George Maciunas, the Lithuanian-born self-styled “chairman” of the Fluxus art movement, saw that paying the rent was one of the most important everyday acts in New Yorkers’ lives. In the 1960s, Maciunas, with a rare combination of wit and pragmatism, established cooperative housing for artists in Soho as part of his art practice. For doing so, he was closely monitored by the city—he would have said persecuted. Maciunas’s vision, this illuminating exhibition argues, made him the “father of Soho.”

Maciunas hit New York as a teenager in the 1940s, having fled Lithuania, and swiftly enrolled at the Cooper Union, where he studied applied and fine art and architecture. His early works, such as the Atlas of Russian History, 1953, map Communism onto geographic shifts. They also show his ludicrous side: the show includes a giant, hollow white playing die that Maciunas—5-foot-11 and usually sporting a shirt and tie—crawled into and used as a vehicle for rolling around on the floor. The strength of this exhibition, organized by the Cooper Union’s Astrit Schmidt, is the thoughtful research that triangulates Maciunas’s politics, art and biography. Photographs on view document the demonstrations Maciunas undertook with Henry Flynt, Tony Conrad and Jack Smith, such as picketing Lincoln Center in the early 1960s—“No More Art!” reads Flynt’s placard. Quixotic activities like this challenged the elite art that, for Maciunas, was linked to social hierarchies—his political ideal was a classless society. In art history textbooks he is too often portrayed as a mere graphic designer for the avant-garde, and you can see why. His best-known projects—research-intensive diagrams and flowcharts of art movements, quirky name cards for artists like Yoko Ono and Nam June Paik, and his famously all-inclusive Flux boxes—are on view here. His satirical zines and posters kept the legacy of Dada alive in the New York underground.

His challenges to existing systems weren’t limited to the art world. The deserted industrial area bounded by West Broadway, Houston Street and Broadway was slated for demolition by urban planner Robert Moses. Maciunas’s idea to convert the buildings there into artists’ lofts was visionary at the time. In 1966, he harnessed artists’ collective buying power and made 16 Greene Street, 80 Wooster Street, 101 Spring Street and a building at the corner of Church and Walker into the first Fluxhouse Cooperative Buildings. The group eventually bought eight buildings for around $800,000 and renovated them—in Maciunas notebooks, which are on display, Philip Glass is listed as a plumber. Trisha Brown, Robert Morris, Annette Michelson, La Monte Young, Hollis Frampton and Jonas Mekas got on board. Maciunas’s vision included communal movie theaters, darkrooms and printing presses.

This kind of countercultural activism “improved Soho and without cost to taxpayers,” as Maciunas notes, but the city was concerned with his failure to file documents correctly, the illegal occupancy of commercial buildings, and perhaps the challenge to Moses’s top-down urban planning that such grass-roots action represented. As the notices of failure to appear in court (on view here) piled up, Maciunas eventually earned an arrest warrant. He turned to art, performance and graphic design in response: he wrote the city letters asking them to stop harassing his sister and torturing his ailing mother, took to wearing gorilla masks in public and laced his front door with razor blades. The correspondence and documentation is nutty: in 1975 and ’76, he sent postcards to the deputy assistant attorney general of New York State from places like the Palace of Fontainebleu (labeled “new residence of George Maciunas”). On them he taunts authorities to come arrest him in Budapest, or tells them “George Maciunas: having a good time in Paris.” He was not, of course, in any of these places. He was instead suffering from pancreatic cancer in Boston, where he would die in 1978. Elegiac video interviews with peers like Jonas Mekas and Shigeko Kubota and footage of him on a sailboat with Andy Warhol, John Lennon and Yoko Ono round out the display; a number of artists still live in the Flux co-op buildings he founded.

There’s irony in seeing a show about Maciunas’s groundbreaking work developing artist cooperatives in Soho in the new Thom Mayne-designed Cooper Union building. The school, free for students since its inception, is now considering charging tuition for the first time, even as it depletes its endowment to build enormous new buildings. Soho and the East Village are becoming unaffordable for the communities that established them. The New York Maciunas loved and sought to preserve is disappearing. “To establish the artist’s nonprofessional, nonparasitic, non-elite status in society … he must demonstrate that anything can substitute art and anyone can do it … art [must] have no commodity or institutional value,” wrote Maciunas. His anti-elitist, anti-commodity prankster spirit is rare in today’s professionalized art world. His do-it-yourself artist cooperatives were part of his larger project, which reimagined society as a whole and made no distinction between art and life. Rather than create monuments to Andy Warhol, I’d suggest one in Soho to George Maciunas. (Through Feb. 2, 2013)