So far, though all of the main Democrats expected to run in this year’s mayoral race have been participating in multiple forums for candidates, none of them except for Bill Thompson have actually officially declared their intention to run. However, mayoral campaign season is clearly about kick off in earnest. Public Advocate Bill de Blasio, one of the all-but-officially declared mayoral hopefuls, sent an email to supporters this morning teasing “a very important announcement about 2013” he will make on Sunday. Sources tell Politicker Mr. de Blasio will be officially launching his mayoral campaign at the event.

Mr. de Blasio will be making his announcement at his home in Park Slope accompanied by his wife and children. In his email, which was entitled “What are you doing on Sunday?,” Mr. de Blasio said he wanted to include his family in the event because it would best allow him to introduce himself to the city’s voters.

“My family is making a very big announcement this weekend — and I hope that you can join us….When I first ran for my neighborhood’s School Board in Brooklyn back in the ’90s, I went door to door throughout the district with Chirlane and my two children, and spoke face to face with the folks and families I hoped to represent,” Mr. de Blasio wrote. “Nearly 15 years later, I still believe this is the best way to represent a community — by introducing my family to yours, speaking face to face with folks from across the five boroughs, and making sure my ears are open to the needs of all New Yorkers.”

Mr. de Blasio’s campaign declined to comment when asked whether the event was an official launch announcement. All we can say is: Sunday! Sunday! Sunday! 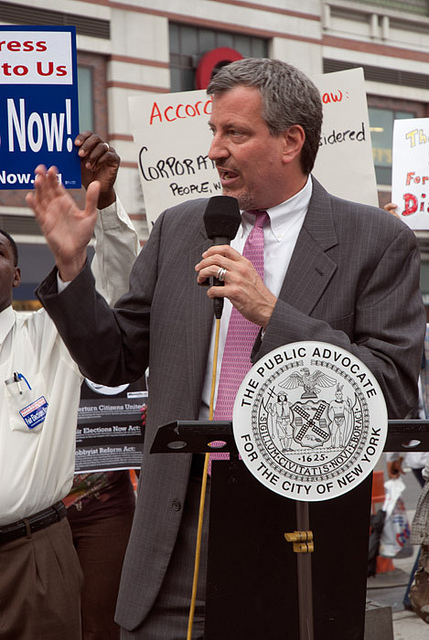