Bill de Blasio’s mayoral campaign launch was, quite literally, a family affair. He made the long expected announcement in the front years of his home accompanied by his wife and son, a fitting setting as he cast himself as a local parent who would wage a populist, progressive battle against the inequitable, out-of-touch policies of both Mayor Bloomberg and his rivals within the Democratic party.

“Government must focus on the needs of families, must be the protector of neighborhoods and must guard the people from the enormous power of moneyed interests. Now my friends, it can be done, but not by elected leaders alone,” Mr. de Blasio said in front of a cheering crowd who filled the sidewalks and street in front of his home. “It requires average New Yorkers who simply refuse to allow their community’s voices to be stifled. It’s their spirit that I intend to sweep into City Hall. A spirit that shouts that all boroughs were created equal and that all our residents matter! And that’s why today, here on my block in Brooklyn, I proudly declare my candidacy for mayor of New York City!”

Mr. de Blasio’s son, Dante, a high school student, was the first one to speak at the podium set up in front of their yellowed, wood paneled house. He was also the first to cast the campaign as an antidote to politicians who have catered to the city’s elites.

“I’m here to support my dad, Bill de Blasio,” Dante said. “Many people throw around the phrase, ‘the people,’ when these candidates only mean to serve one group. Far too often, this group is the rich and the powerful citizens who have no need of any help. My father serves all people.”

Dante also read a message from his sister, Chiara, who he said was “away at college” and unable to attend.

“My dad is fully invested in providing us with the brightest future possible. … No matter what your political beliefs are, I think the most important thing for you to know is that my father is a truly selfish,” Dante said before catching himself and continuing, “Selfless human. He’s a man that has only the greater good in mind.”

After her son spoke, Mr. de Blasio’s wife, Chirlane, got behind the microphone and gave her explanation for why her husband chose to launch his campaign at his home with his family by his side.

“I remember when we ran Bill’s first campaign out of our living room with lots of pizza and coffee. We couldn’t do that this time around, but we have you as close to our home as possible. Let me explain why,” she began. “One of the reasons I knew Bill and I were right for each other is because we agreed so completely about the kind of neighborhood that we wanted to live in.”

She went on to attribute their attraction to Park Slope because of its diversity and strong sense of community.

“In 1992, this place wasn’t so fancy, but it did have all the things that we needed,” said Chirlane. “We loved the mix of ethnicities, all the mom-and-pop shops. … We lived with a group of everyday New Yorkers who looked out for each other. It was a really New York neighborhood.”

Chirlane then introduced Mr. de Blasio as an “outerborough working dad, a public school parent, a lifelong progressive reformer … a leader who champions New York as a city of neighborhoods and families … my husband and New York’s next mayor.” Before beginning his speech, Mr. de Blasio shared a strong hug with his wife and son that left Dante fixing his voluminous hairdo.

“Don’t mess with the fro!” Chirlane laughingly admonished her husband.

After thanking the crowd for braving the frigid weather, expressing pride in his son and love for his wife, Mr. de Blasio started to speak. Throughout his nearly twenty minutes of remarks, Mr. de Blasio emphasized what he dubbed his “neighborhood perspective” on politics. He contrasted this with the approach of Mayor Michael Bloomberg.

“Like so many New Yorkers, my heart belongs to my neighborhood. And we deserve a city government that actually believes in our neighborhoods and sees things the way we do. Now, that may have seemed impossible in recent years, we’ve gotten so used to the elitists at City Hall, that the notion of government of and for and by our neighborhoods may seem to have perished,” Mr. de Blasio said.

“I have to say, I think maybe we’ve all gotten a little numb because our democracy has been repeatedly attacked by the power of money,” said Mr. de Blasio. “In 2008, the backroom deal that led to the term limits change and the not-so-subtle use of Mayor Bloomberg’s wealth. In 2009, the $112 million he spent on his reelection. In 2010, the horrible Supreme Court decision in the Citizens United case. Is it any wonder that average citizens feel overshadowed?”

Mr. de Blasio’s attacks on Mayor Bloomberg also served as swipes at his all-but-officially declared Democratic rival in the mayor’s race, Council Speaker Christine Quinn, a close ally of the mayor. Particularly, Mr. de Blasio seemed to be aiming at Ms. Quinn when he emphasized his support of the paid sick days legislation she has been accused of stalling and when he criticized the way Mayor Bloomberg was able to bypass term limits laws and secure a third term through what many saw as a deal with Ms. Quinn.

“I’m very proud to say that I led the opposition to Mayor Bloomberg’s plan to change term limits. … Mayor Bloomberg’s backroom deal overturned the will of the voters and we lost that fight to his deep pockets,” Mr. de Blasio said. “Here we are after twelve long years and here’s the truth, our city isn’t living up to its potential, not by a long shot. This mayors policies have been very good for some in our city, but so many middle class New Yorkers have been ignored and priced out.”

Despite his harsh words for Mayor Bloomberg, Mr. de Blasio conceded the city’s current top politician has done “some good and important things that need to be continued.” Specifically, he praised the mayor’s work on public health, his effort to gain mayoral control of the public and his push for gun control, immigration reform and climate change action on the national stage. However, Mr. de Blasio said that overall the mayor’s administration has led to a divided New York.

“On a whole range of other issues he simply neglected our neighborhoods and failed. And those who would seek to continue those policies are destined to fail millions of New Yorkers as well,” said Mr. de Blasio. “So, let’s be honest about where we are today. This is a place that in too many ways has become a tale of two cities, a place where City Hall has too often catered to the interests of the elite rather than the needs of everyday New Yorkers.”

Though most of his jabs seemed to be reserved for Mayor Bloomberg and Ms. Quinn, Mr. de Blasio also characterized his other Democratic opponents.

“Of course, New York City has a long tradition of being a Democratic town, but there are real differences among the Democratic candidates and the choice we make among them will define our future,” Mr. de Blasio said. “There are some who believe that Mayor Bloomberg’s policies from the past twelve years just need to be tweaked here and there and that his vision should continue more or less uninterrupted for the next four years. There are others who practice a politics of the moment, who are heroic in election years, but not engaged in the day-to-day fight to save our neighborhoods when their names aren’t on the ballot.”

Along with framing his position as a leader by, for and of New York’s neighborhoods, Mr. de Blasio shared some of the backstory that brought him “to this moment.” He described being the son of a father who lost his leg in World War II, subsequently suffered from “what we now know as post-traumatic stress disorder,” then “became an alcoholic” and “split up” with his mother. Mr. de Blasio also rattled off various items on his political resume including his time as a “grassroots organizer,” a staffer for former Mayor David Dinkins, working in the Department of Housing and Urban Development during the Clinton Administration, managing Hillary Clinton’s campaign for Senate in 2000 and serving in the City Council.

After his speech, there was another reminder of Mr. de Blasio’s Clinton connection. As Mr. de Blasio shook hands with supporters, the sound system played the theme song of Bill Clinton’s 1992 presidential bid, Fleetwood Mac’s “Don’t Stop (Thinking About Tomorrow).”

The crowd also seemed to included many of the de Blasios’ friends and neighbors. One woman who approached the family told Mr. de Blasio’s son, “Dante, I’m ready to vote for you.”

“I’m your neighbor and a journalist, Alison Rose-Levy right across the street at Huffington and Alternet,” another woman said as she shook Mr. de Blasio’s hand. “Good luck Bill.”

“You work for all the right places,” Mr. de Blasio said with a smile.

“I’d love to do an interview with you,” Ms. Rose Levy said.

Mr. de Blasio pointed to the house behind him. 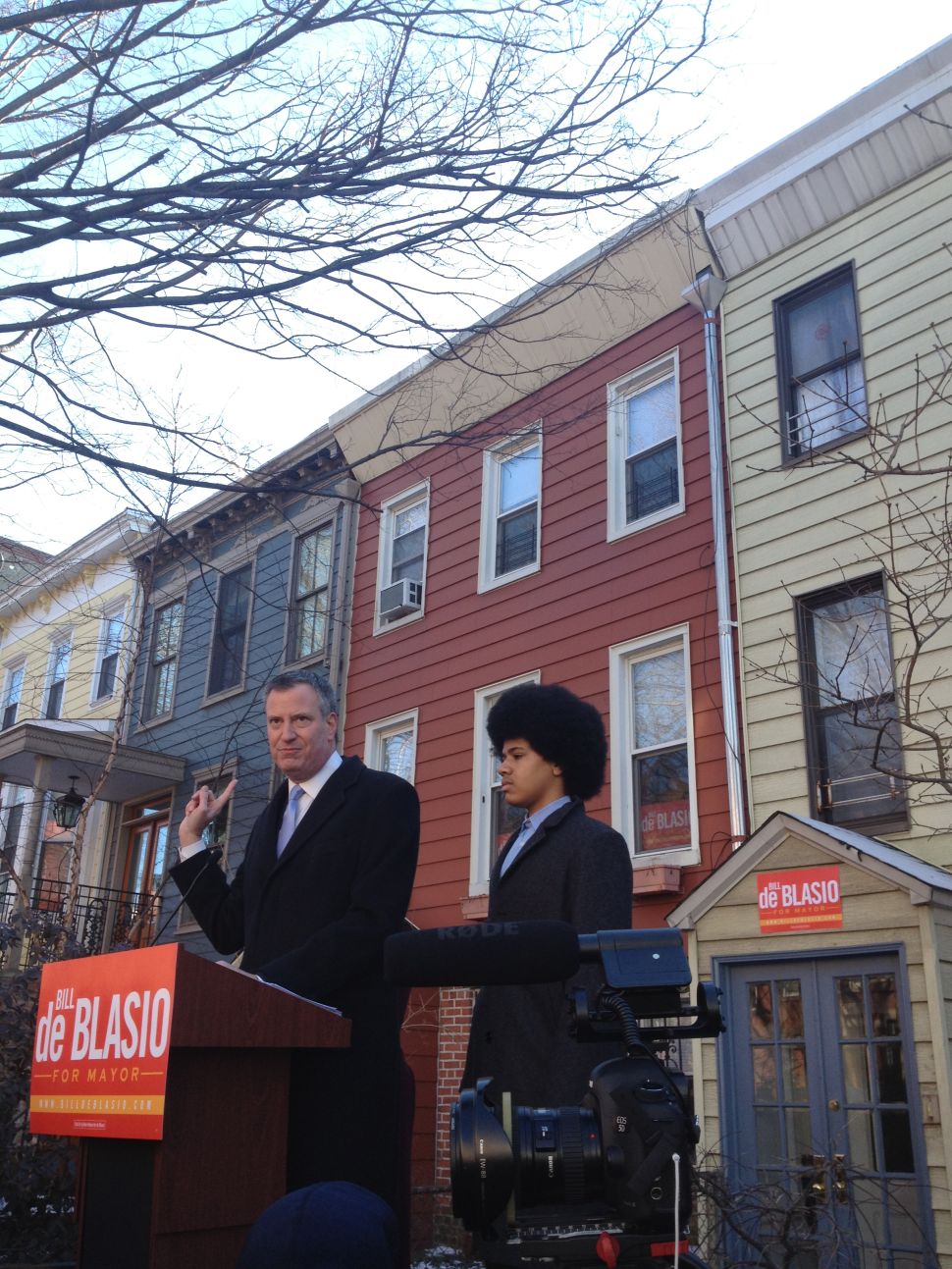