Bill de Blasio in the Bronx.

It snowed, hailed and rained on Bill de Blasio’s parade. The public advocate spent Monday, his first official day as a mayoral candidate, on a journey that spanned over sixty miles and all five boroughs, a dramatic, physical manifestation of his plan to propel himself to Gracie Mansion by reaching out to disenfranchised residents in the far flung corners of the city and channeling populist backlash against the policies of Mayor Michael Bloomberg along the way.

Mr. de Blasio began his morning on the Upper East Side for a taping of Fox 5’s Good Day New York. He then journeyed to greet commuters in Washington Heights, the first of five neighborhoods on his marathon route.

Politicker caught up with Mr. de Blasio at the second stop on his tour, a bus station on East Fordham Road in the Bronx where a handful of volunteers stood with the candidate in a relentless flash snowstorm as he shook hands with passers-by.

“This is Super Bowl weather,” proclaimed Wilfredo Pagan, one of the volunteers. “Where there’s a Bill there’s a way.”

Few of the commuters we saw stopped in the inclement weather for more than a quick handshake with the candidate during his twenty-five minutes in the Bronx. Most of the people he greeted got a brisk, cheery salutation that became Mr. de Blasio’s refrain throughout the day.

Though the wet, frigid conditions seemed to be quite literally dampening the response, Mr. de Blasio doesn’t plan to let Mother Nature slow down his campaign.

“My background is as a grassroots organizer and you never let weather get in your way,” he told us. “You know, the clock is running.”

Before his next stop in Queens, Mr. de Blasio phoned in for an appearance on The Brian Lehrer Show where he continued to hammer home the messages he was trying to demonstrate with his citywide tour.

“I think it’s no secret this mayor has a pretty elitist worldview. He clearly doesn’t see what life is like the farther you go out in the boroughs,” Mr. de Blasio said of Mr. Bloomberg, the man he hopes to succeed in City Hall. “The mayor’s field of vision doesn’t get that far out of Manhattan.”

Conditions had not improved when Mr. de Blasio reached Jackson Heights, though the elevated train tracks above the the 74th Street-Broadway subway station shielded him from the small hailstones that were beginning to hit the streets. The candidate leapt back and forth trying to position his lanky six-foot-five-inch frame in the ideal position in front of the station’s doors.

“We’ve got to find where people are flowing,” he said anxiously.

After a few adjustments, Mr. de Blasio was clearly satisfied.

Mr. de Blasio is confident his pavement pounding approach will leave voters convinced he is better suited to address the needs of the entire city than his rivals.

“If you’re going to change the status quo in this city, it’s going to take a forceful approach,” he told us. “I won’t speak to the details of my opponents, but I think the approach that I take is the one that actually helps to achieve some real change. … Some of my opponents believe in making that change, some don’t. Some are doing something about that, some aren’t. I think that what voters will see in this city that I back up my words with action.”

Joanne Naumann, one of cadre of volunteers who showed up to help Mr. de Blasio campaign in Queens was certainly convinced he would be a better mayor than the other Democrat who currently has a wide lead in the primary polls, Council Speaker Christine Quinn.

“Christine Quinn, that’s our rival, she’s a Republican,” Ms. Naumann said to a man who stood with her on the sidewalk watching Mr. de Blasio.

Later on, we informed Ms. Naumann that Ms. Quinn and Mr. de Blasio are both Democrats.

“I don’t know exactly what she represents, but I’m with Bill,” she said. Less than an hour later, Mr. de Blasio was in Brooklyn at the senior center in the Boro Park Jewish Community Council where several of the elderly women he met also seemed confused about the candidates in the mayor’s race.

“He’s good-looking. He looks like, like a man!” one proclaimed after meeting Mr. de Blasio, before adding, “Koch is finished, Mayor Koch is finished.”

“Koch is gone, we’ve got Bloomberg,” grumbled Gizela Jeramias, who was seated next to her.

When asked what she thought about the current crop of Democratic mayoral candidates, Ms. Jeramias was blunt.

“I don’t know anything about them,” she said.

Mr. de Blasio worked the tables, which seemed to be organized by nationality. He greeted a group of Italian women in their native tongue. Among a group of Hungarians, Mr. de Blasio sought common ground after meeting a centenarian Holocaust survivor.

“I read a very powerful book by George Soros’s father … the story of how people had to find their way to survive when the Nazis came in,” said Mr. de Blasio. “Very powerful, very powerful.”

“Well, no, but I’m talking about the story his father wrote about how they survived the Holocaust,” he responded. “A very powerful story in Budapest 1944 and ’45. That story was extraordinary.”

International tensions also reared their head when a woman who identified herself as Czech sidled up to us and whispered, “Hungary is the worst. … Hungarian is a shit language.”

Mr. de Blasio knelt next to the 100-year-old Holocaust survivor and marveled as one of the workers in the senior center explained she kept busy with word search puzzles. Another woman at the table offered the secret to their longevity.

“We Hungarians live more,” said the woman. “Like me.”

“You think how old I am?” the woman asked in broken English.

The woman informed him that he was off by three decades.

“No you are not,” said Mr. de Blasio, feigning disbelief. “You are not. … What do they drink in the in Hungary?”

Though Mr. de Blasio clearly charmed many of the women at the senior center, he didn’t seem to have gotten through to the centenarian. We asked her whether he had her vote.

“I don’t understand what you say,” she said.

After Mr. de Blasio thanked the women for the “great pleasure” of their company, he got in his black hybrid SUV and headed to Staten Island. Standing in front of the New Dorp railroad station, Mr. de Blasio quizzed his volunteers on a series of statistics.

Did they know Staten Island is part of the “most Italian-American congressional district by population percentage in the United States of America?” Were they aware New York hasn’t had a Democratic, Italian-American mayor since Vincent Impellitteri’s term ended in 1953?

His questions were clearly designed to show why Mr. de Blasio believes he could be able to bring the Democratic majority on Staten Island, which often votes Republican, into the outerborough coalition he hopes will propel him to City Hall. The final query in Mr. de Blasio’s pop quiz impromptu pop quiz was about the margin of victory in President Barack Obama’s recent re-election, which was the largest any incumbent has enjoyed since Ronald Reagan in 1984. Mr. de Blasio described this as “an extraordinary statement on the Obama campaign, considering they were goners in the eyes of certain analysts.” Since the Obama campaign was known for the same type of grassroots approach Mr. de Blasio aims to employ, the second message behind his political statistics test was also obvious; candidates who are behind in the polls, like Mr. de Blasio, can pull off improbable victories.

Mr. de Blasio also offered further insight on the reasons for his optimism about how he will perform against Ms. Quinn and the other Democrats he will be pitted against in the primary election later this year.

“I think, if it’s a question of what people are feeling and do they constitute a majority, there’s no question in my mind that the things I’m talking about are what the majority of Democrats care about,” he explained. “I think that means, in a primary where it’s crucial to turn out your vote, that we’re going to have a lot of folks who connect with my message.”

One prominent naysayer has been Deputy Mayor Howard Wolfson who has repeatedly argued Mr. de Blasio and other candidates who are focusing on criticizing Mayor Bloomberg are making a mistake given the mayor’s high approval ratings. This is another point on which Mr. de Blasio believes his work on the city’s streets will defy the polling data. “You can talk about all the poll numbers you want, but that doesn’t reflect the reality on the ground. … I think when you talk to active Democrats, there’s no question that they are not satisfied. They don’t think the status quo is sufficient,” said Mr. de Blasio. “So, you know, Howard can keep falling back on poll numbers, but that’s not how elections work. We’re about to have a real debate in this city, something I don’t think we’ve had enough of in the last few years. And I think when that debate ensues, that people are going to embrace the notion of some real changes that help people in middle class neighborhoods, working class neighborhoods, who just aren’t being reached by the current policies.”

“I’m Bill de Blasio. I’m running for mayor,” he said as he shook the man’s hand. “How you doing?”

Rich, who was wearing a colorful knit cap and had a pair of massive white headphones perched atop his head was quick to respond.

“I hope you get elected,’ he said. “I hope someone better than Bloomberg gets elected.”

“Yes, we are. The city needs a change,” said Rich. “The way we’re going now, we’re not going to survive another year.”

As Rich walked away, one of Mr. de Blasio’s volunteers chased after him to get his name and contact information. In their haste, they nearly fell to the ground after slipping on the snowy sidewalk.

Once two trains came and went from the railroad station, Mr. de Blasio was finished with Staten Island. As he walked back to his car for the last event of the day, taping another TV appearance at NY1’s studios in Manhattan, a smiling Mr. de Blasio addressed his team.

“We have completed the mission,” he said. 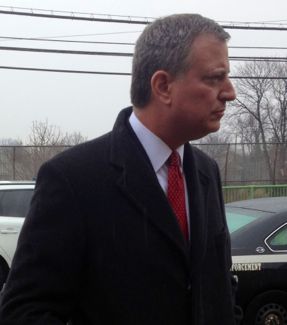