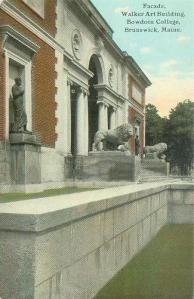 Following a model used in Rome’s ancient republic, the Bowdoin College Museum of Art in Brunswick, Maine, will soon be ruled by two leaders, the museum announced today. Those new co-directors are Frank H. Goodyear III and Anne Collins Goodyear, who were married in 2000. They start in their new positions in June 2013.

In a statement released to press, Cristle Collins Judd, Bowdoin College’s dean for academic affairs, explained the school’s decision to appoint the couple:

“As we have gotten to know Anne and Frank, we have been impressed with their passion and creativity, their vision of the special role that a college art museum can play, their commitment to the role of the arts in a liberal arts education, and their focus on the fundamental importance and relevance of art in all aspects of our lives.”

The two take the place of Kevin Salatino, who stepped down as director of the museum last year to become director of art collections at the Huntington Library, Art Collections and Botanical Gardens, in San Marino, Calif.