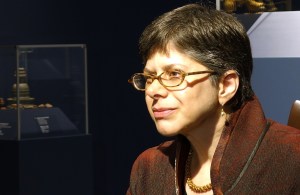 The Brooklyn Museum announced today that it has hired Susan L. Beningson, an art history professor at the CUNY and Rutgers, as its new assistant curator of Asian art.

A scholar of Chinese Buddhist and tomb art … she is perhaps better known for her work on such exhibitions as Providing for the Afterlife: “Brilliant Artifacts” from Shandong (China Institute, NY, 2005), Recarving China’s Past: Art, Archaeology, and Architecture of the “Wu Family Shrines” (Princeton University Art Museum, NJ, 2009), and Buddhist Sculpture from China: Selections from the Xi’an Beilin Museum (China Institute, NY, 2007) among others. Dr. Beningson will be working with Joan Cummins, Lisa and Bernard Selz Curator of Asian Art, to re-assess and re-interpret the Brooklyn Museum’s important holdings of Asian art in preparation for a major reinstallation of the Museum’s permanent galleries of Asian and Islamic art, scheduled to open in 2015.