As a resident of the West Village, Lee Ielpi trudged by a fence of ceramic tiles daily in the raw weeks after 9/11, one that developed a comforting presence over the next decade, transformed from an impromptu memorial to an enduring memorial. Now that they have been to a library nearby, on display for all to come see and remember that horrific day, Ielpi was fighting off tears at an unveiling this morning.

“Time does not heal the wound—it has a scab on it, and every now and then I peel it off and talk about my son,” said Mr. Ielpi, president of the September 11th Families’ Association. He lost his son, a firefighter, in the attacks. “We have an obligation to our children, to our grandchildren, to never forget. It is through education, it is through enlightenment. This is part of that process.”

The tiles had stood at the corner of Greenwich and 7th avenues since shortly after the attack before being moved to the Jefferson Market Library on 6th Avenue and 10th Street, an accommodation to the MTA, which had long-standing plans to build a ventilation plant on the old corner.  In there new home, the tiles will be displayed behind glass in an exhibition throughout 2013. Created by average New Yorkers and out-of-towners to honor those who perished in the World Trade Center attacks on September 11th, 2001, the Tiles for America project was originally the brainchild of Lorrie Veasey, a potter and purveyor of several local ceramics stores (and now a consumer website) Our Name is Mud.

Tiles for America had been a “spontaneous” memorial where Ms. Veasey and any member of the public could paint a tile with an inspirational message—one reads “fight hate with love”—and hang it on the fence. The MTA had been weighing its controversial plan for years, before deciding in the fall it would move ahead. Some in the neighborhood wanted the memorial to remain there, and the MTA has said it would incorporate some of the tiles into the plant’s design.

Some of the tiles were given to the families of 9/11 victims, some are missing—Ielpi stressed to reporters not to focus on the missing tiles—and the rest are on display at the Jlibrary, where Council Speaker Christine Quinn worked with New York Public Library President Tony Marx to have the tiles placed temporarily. 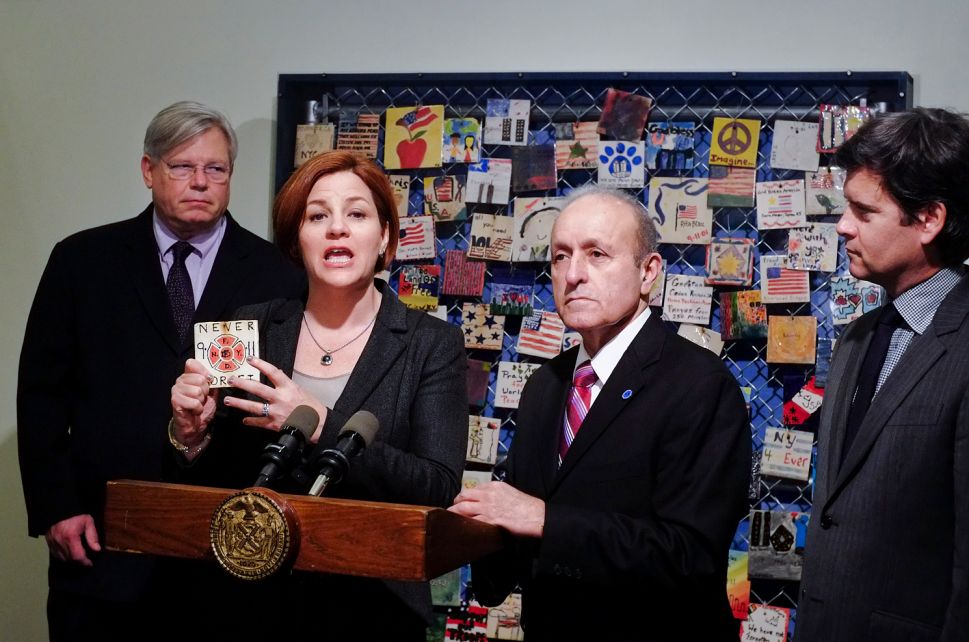