Congressman Charlie Rangel sat down with a small group of reporters yesterday for a wide-ranging discussion at his office. One of the main topics was the brewing battle over the debt ceiling and Politicker asked the congressman for his take on the idea President Barack Obama can avoid a fight with congressional Republicans who won’t raise the debt cap by having the Treasury Department mint a $1 trillion coin.

“I’m working on the design, one for the president and one for me,” Mr. Rangel said with a smile.

We wondered whether that meant he wanted to see his portrait depicted on the coin.

“No, I want one of the coins,” the congressman responded as the assembled reporters laughed. “The president gets one, he puts it in the treasury. I get one, I keep it. Makes sense to me.”

Earlier in the conversation, Mr. Rangel criticized Republicans who have said they will not vote to raise the debt ceiling without spending cuts because he said they are solely focused on slashing “so-called entitlements” that are social programs for “vulnerable” portions of the population.

“They’re still going to come back and talk about spending. Theres’ a lot of money still left, but it appears as though the Republicans are targeting entitlements, entitlements, entitlements. I’ll leave it up to you as to why, if you owe $16 trillion and you’re trying to cut back spending that you would find out what part of the community is the least able to defend themselves against cuts,” said Mr. Rangel.

He went on to describe Republicans’ focus on cutting entitlements as being against the religious principles of many conservatives.

“It seems almost unchristian. Especially those who run around saying they’re guided by, ‘What would Jesus do?,’ to pick Social Security, which is a supplement for pensions for the aged….To pick Medicaid, which you take when you have to be two things to be eligible; you have to be sick and you have to be poor,” Mr. Rangel said. “Then, of course, the last thing is Medicare, which means that you have to be old and sick. Now, with all of the programs that we have, it seems as though that the ones that we’re concentrating on are these three so-called entitlements.”

Mr. Rangel also weighed in on the idea President Obama could also dodge the debt fight by unilaterally raising the ceiling using authority given to him by a provision in the 14th Amendment. President Obama has said his lawyers were “not persuaded” that this approach would be legal.

In Mr. Rangel’s interpretation of the amendment, the president does indeed have the authority to unilaterally raise the borrowing ceiling. Though he said he doesn’t “see how it could be unconstitutional” to bypass the debt debate with the 14th Amendment, Mr. Rangel said he would defer to President Obama and his lawyers on the issue.

“I’m not going to go against constitutional scholars,” said the congressman. “But I’d be proud of the president if he found constitutional support that he believed in. I’d say, ‘Right on.'”

Though President Obama has dismissed the idea he would use the 14th Amendment to raise the debt ceiling without an agreement from Congress, he has also said he doesn’t plan to negotiate on the issue. Mr. Rangel said he’s not sure what the president’s ultimate strategy will be for raising the debt ceiling without congressional support, but he’s looking forward to watching it all play out.

“He had said that he is not going to negotiate the debt ceiling, so I have no idea what that means, but I’m going to be a spectator to that one boy,” Mr. Rangel said. “I’m going to have a front row seat.” 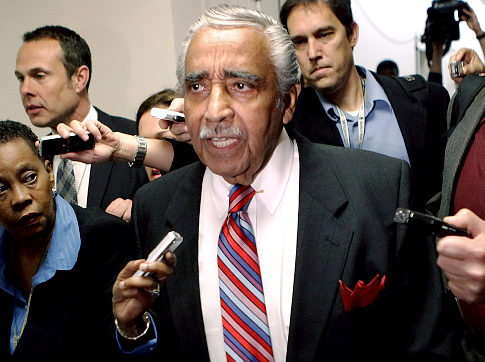