State Sen. and former Gov. Dick Codey, who says he is mulling a gubernatorial run, today urged the governor to step up and make his voice heard on gun control.

On an appearance on NJTV’s NJ Today, Codey told host Michael Schneider Gov. Chris Christie should join other leaders in calling for a ban on assault weapons.

“Governor, you’ve said the gun issue is a complicated issue,” Codey said while turning to the camera as if speaking straight to the governor. “Respectfully, it’s not. I urge you to join the president, Mayor (Michael) Bloomberg and Gov. (Andrew) Cuomo and get on board with this issue. We’ve been a leader on gun control in this state for a very long time. Step up, do the right thing.  Join us.”

When pushed by Schneider on how a state governor could bring about a federal weapons ban, Codey pushed back, saying the governor can raise his voice with others to push for the legislation.

In a wide-ranging interview, Codey took aim at the governor’s focus on Superstorm Sandy during Tuesday’s State of the State address.  Outlining economic statistics including the 9.6 percent unemployment rate, the foreclosure rate, the slow growth of the economy and the poverty rate, Codey said there are others in the state who are suffering for reasons other than the storm’s destruction.

“I don’t know where he gets all these roses,” Codey told Schneider.  “It’s not nice out there.  You’ve got Sandy and then you’ve got all of these other people who are suffering as well and he didn’t mention them.”

Codey is contemplating a run for governor, telling PolitickerNJ he is reaching out to national Democrats for monetary commitments before making his decision.  To date, only state Sen. Barbara Buono has declared her candidacy, however, some in the state believe Codey gives Democrats their best shot at unseating Christie. 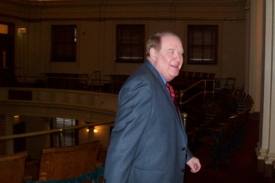