The notion that artists should move out of the white box was in the air. At almost the exact same time that Mr. Buren was pasting his stripes around urban areas, the New York-based artist Richard Artschwager, whose retrospective is now at the Whitney, was installing his first “blps”—knockwurst-shaped blobs—around the city.

As for the stripes that appeared around town last fall, Mr. Buren said he wouldn’t even consider doing that in Paris anymore. “I know today that many, many, many people in Paris will quickly say, ‘Oh yes, it’s a work from Buren,’ because in a way I’m quite well known, and I think that destroys the idea of the piece.” But he liked doing it in New York, where it might still catch people unaware, a spare stretch of lines amid all of the graffiti and advertising. “That piece was looking very fresh. Very fresh,” Mr. Buren said, sitting in Petzel. “Of course, I think that, so take that as you want. It’s said by myself. It could be totally wrong!”

About other opinions, he makes no apologies. He’s disdainful of the art market (“supposedly the most interesting work will be the most expensive”) and of most viewers (“there’s not so many people who like to make an effort for an artwork”), and he still has issues with the work of the late sculptor Donald Judd, with whom he quarreled (“Flavin was much more innovative”).

He’s also not a fan of artists who once staged happenings and performances and now sell documentary photographs of those events. “I have never, never, never wanted to make and sell any kind of thing that could be a picture of a work,” he said. “Never, never. It’s a very easy way to make some money, but within a certain time, not I think so long”—and this should give a sense of the scale on which he’s thinking these days—“40 or 50 years later, everything like that will start to look really meaningless.”

Selling such photos “was already a little absurd.” Now, he noted with exasperation, many performance artists are re-performing pieces that they did decades ago, in new contexts. “To redo it, I think it is even more absurd,” he said, laughing.

Ironically, there is a kind of re-performance to Mr. Buren’s own work at Petzel. Each site-specific paper piece at the gallery is actually based on a previous work. The one that was giving the installers trouble that afternoon, for instance, is based on a site-specific work that he did at the Kunsthalle Düsseldorf in Germany in 1968. It was gallerist Stefania Bortolami’s idea to redo some of those pieces, he said. “I’m using this new space, which, of course, is totally different, to rework from the ideas of these previous works—so, in fact, it’s totally in situ, and it’s totally old and new.” A historical survey, of sorts, done with all new work. 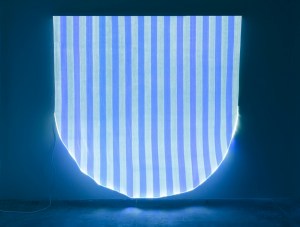 The show at Bortolami has new pieces that he calls “situated works,” which can be moved about like ordinary paintings but still carry with them certain rules when installed—like an agreement they will always be hung flush with the floor, or in the center of the wall. (A recent piece he made after Sandy was a row of alternating-color blocks that have to be hung at the level of the water that flooded the gallery.) He’s teamed with the Léon, France-based textile company Brochier Soieries to produce new stripes using fiber optics (these look like simple sheets of plastic until illuminated) and another set of Plexiglas stripes over linen stripes.

Both shows are dedicated to the memory of artist Michael Asher, who died last year at age 69. “We not only were very, in a way, admiring of the work of each other, but very, very close friends,” he said. “That was a big loss.” Mr. Asher’s work frequently critiqued institutions with an even more directly political voice than Mr. Buren’s.

“The best work he did when he found something that was just amazing that no one was thinking about, or to find a way of something that everyone knows, and finding a way to show that,” Mr. Buren said. The same can be said of his own pieces, which lead the eye on new trails through museums and public spaces, and that force you to see things that often go unnoticed or unquestioned. One of his particularly memorable pieces was in MoMA’s 2008 “Color Chart” show: a striped vest for MoMA’s guards, produced with Brochier Soieries. “I wanted the people to have something nice,” he said. “Not some fantasy from an artist.”

There is no question that in recent years Mr. Buren’s art, which made its last major appearance in New York with his Guggenheim retrospective in 2005, has become more interested in beauty for its own sake, as his rigidly limited selection of colors and materials of the 1960s has given way to a wider array of display options—in silk and glass, as glowing fiber optics and an Hermès scarf. For the biennial Monumenta exhibition in Paris’s Grand Palais last summer, he drew a quarter of a million visitors in six weeks with a hulking installation of elevated plastic screens that bathed visitors in color. Radical critique has given way to wallpaper, one is tempted to say. It’s an old story—an avant-garde project shocks and then turns romantic, becoming mere decoration.

Notions of what art is truly radical or conservative, decorative or avant-garde, are continually in flux. Mr. Buren pointed to Matisse’s paper cutouts. “Even Henri Matisse was completely attacked by people, saying, ‘Oh, he’s become completely gaga. He’s an old guy. Look at this stupid work, totally decorative,’ when he did maybe the best thing of the time.”