The U.S. Navy has a big job, monitoring all seven of the seas. (There are seven, right?) In fact, short of a clone army of incredible Mr. Limpets, there’s no easy way to distribute resources so they can respond quickly to possible regional flare-ups. And so DARPA’s latest, greatest idea for the waterborne branch of the armed forces, Popular Science reports, is the “Upward Falling Payloads” program, which:

seeks to create technologies that would allow the Navy to leave unmanned systems and other distributed technologies hidden in the ocean depths for years on end and deploy them remotely at the push of a button when the need arises.

That sounds pretty futuristic, but it also faintly rings a bell. Why does that sound so familiar? Oh, right: It’s basically War of the Worlds: Ocean Edition. Here’s how Steven Spielberg’s 2005 version of the story opened:

Ray reaches the place where multiple lighting bolts struck the ground and witnesses the ground heaving up as a massive machine with three long legs climbs out. The Tripod gives off a loud blaring sound before opening fire with heat-rays, vaporizing bystanders and destroying everything in its path.

You might also recognize the theme of “robots chilling out under the sea” from Transformers: Revenge of the Fallen.

However, before anyone gets too creeped out and pukes up their raspberry ketones, DARPA doesn’t want weapon systems, which you can’t just leave lying around unattended on the ocean floor in potential war zones, because other countries will just snatch them up. They’re thinking more along the lines of surveillance.

We wonder what percentage of DARPA’s annual “research” budget goes to purchase new titles for the office video library. 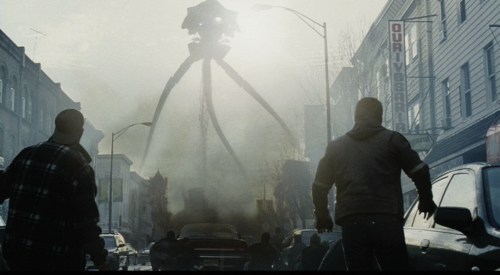