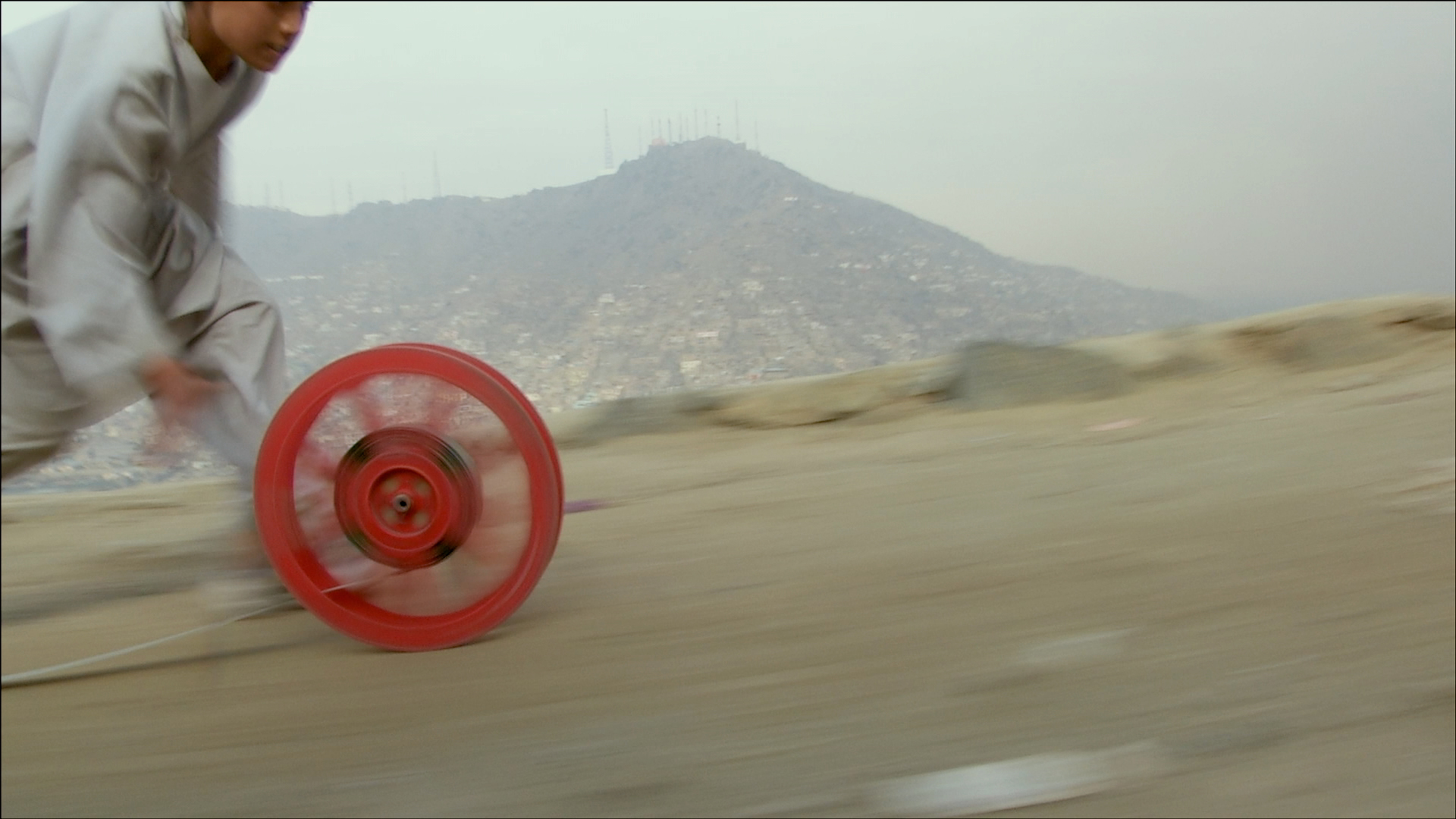 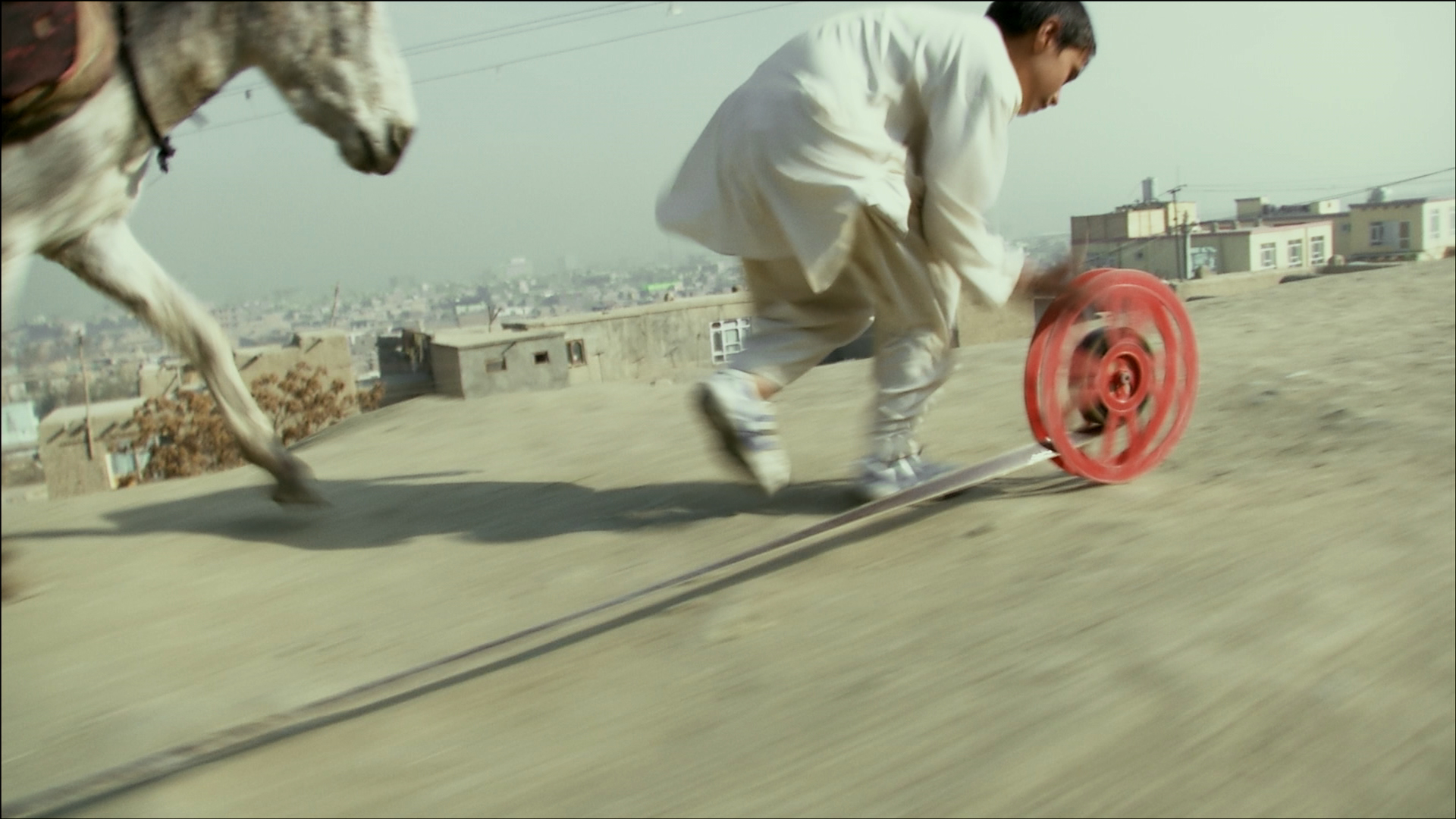 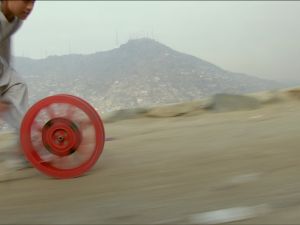 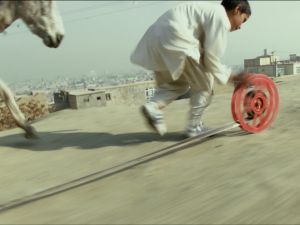 On Sept. 5, 2001, the ruling Taliban militia raided the Afghanistan National Film Archive in Kabul and burned much of its contents in a fire that lasted two weeks. Most of the destroyed films were just prints, not original negatives. That information is provided at the end of Reel-Unreel (2011), a 20-minute film made by Belgian-born, Mexico City-based artist Francis Alÿs in collaboration with Julien Devaux and Ajmal Maiwandi for the Documenta 13 exhibition last summer in Kassel, Germany, and now on view at David Zwirner.

The film opens with long shots of dun-colored Kabul. Young boys play in the hills of the city as a black military helicopter cruises overhead. One boy frames it in a rectangle with his fingers as though he is shooting a film. In the one scene, a group of boys examine strips of film. “All these people are locked up,” one says. For most of the film, two boys are off and running, pushing along two metal film reels—one red, one blue—along the area’s rough dirt roads, leaving long trails of film behind them as they go.

Many of Mr. Alÿs’s past performances and videos are marked by smug poeticism (2002’s When Faith Moves Mountains, in which 500 shovel-wielding volunteers attempt to move a sand dune 10 centimeters) or milquetoast boundary-testing (1996’s Narcotourism, in which he wandered Copenhagen for a week, after dropping a different drug each day). And at first, Reel-Unreel reads as facile allegory—children in a battered nation pushing film haphazardly through their streets as a metaphor for the imperfect, improvisational way in which succeeding generations will write their histories.

But watch for a while, reclining on the thin mattresses on Zwirner’s floor, and the absolute joyfulness of the film may convert you, as it did me. The kids, who take turns wielding the reels, are loving every bit of the challenge, learning to guide those wheels expertly with their hands, down craggily cement streets, around passing vans and even through fires. The symbolism throughout may not be subtle, but the action is thrilling.

In an adjoining room of the show are several of Mr. Alÿs’s small paintings, which critic Peter Schjeldahl once hilariously declared “fey to the max.” (“You would be ashamed of disparaging them, as you would of kicking a kitten,” he wrote on the occasion of the artist’s 2011 retrospective at the Museum of Modern Art and MoMA PS1.) These new works—characteristically slight in terms of technique, though not content—show scenes from Afghanistan (children, soldiers, wandering packs of dogs) alongside rectangular blocks of color sourced from television test signals. They’re blank markers of the artist’s inability to depict in painting the violence of the nation, he has said.

Specific stories, he seems to have concluded, are not his to tell. Taking a refreshing step to the side from his frequent role as protagonist in his films, he lets the boys be the stars and lead the action. At the moment, almost half of Afghanistan’s population is under 15 years old. Children like those who appear in the film will be responsible for filling in those abstract test-screen patterns that he has left on his canvases. And then there is the matter of the girls, who are nowhere to be seen. (Through Feb. 9, 2013)