Garden State Equality leaders say Defense Secretary nominee Chuck Hagel has a lot of work to do to convince the lesbian, gay and transgender community that he will be able to fairly and effectively lead the nation’s military.

In 1998, Hagel expressed opposition to James Hormel, U.S. Ambassador to Luxemberg nominee, on the grounds that Hormel was “openly aggressively gay.”

“We love our president and we’re proud to support him but what an extraordinarily insensitive nomination,” Goldstein told PolitickerNJ.com. “It’s hard to believe there is not another person on earth who doesn’t have Chuck Hagel’s credentials who is not as offensive. The nomination is puzzling at best and stunning at worst. Frankly we hope Republicans and fair-minded Democrats hold firm in keeping Hagel’s feet to the fire.”

Troy Stevenson, chairman and CEO-elect of Garden State Equality, worked for Obama in 2008 and 2012 and said it would be difficult to find a stronger ally of the president’s than himself.

But he said the Hagel nomination is “extremely concerning.”

“We need to know if his apology was sincere,” he said of Hagel’s retraction of his initial criticism of Hormel.

Goldstein stopped just short of opposing Hagel, but emphasized that the nominee must convince through his testimony that he is a “vastly changed person.”

“He’s going to have to describe his change of mind and we’ll be looking for the specifics,” Goldstein said. “Right now we are approaching this nomination with the utmost skepticism.”

Hormel was the keynote speaker at a 2007 Garden State Equality session and Goldstein said he recalled him as a thoughtful and modulated thinker, a public servant and hardly a “fire-breathing radical.”

Goldstein said he is troubled that Hagel, as far as he knows, never picked up the phone to apologize to Hormel.

“He also waited 15 years to retract his statement,” said a wary Garden State Equality leader. “We’re looking for a renunciation of his previously stated views. We want to know what he will do to prove he is a leader of different thinking.”

In addition, like Stevenson, he said, “I would like to see Chuck Hagel say he supports the applicability of Don’t Ask Don’t Tell to members of the transgender community. If he does that, I would be profoundly moved.” 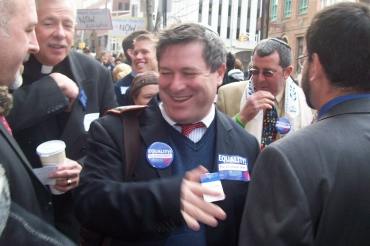