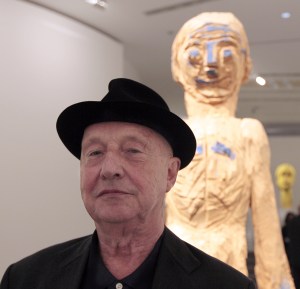 Here’s a doozy of an interview with the painter Georg Baselitz, courtesy Der Spiegel. Who knew he was so curmudgeonly? And, uh, really insulting.

Here he is on the media:

SPIEGEL: Gallery owners and collectors are both crazy about you, and museums are constantly singing your praises.

Baselitz: But not the media.

Baselitz: Is that so? I’ve had some major exhibitions abroad lately, and yet there was hardly a word in the FAZ (Frankfurter Allgemeine Zeitung), for example. And that was only because I had previously said that the relevant editors at the FAZ suffered from pandemic mental enfeeblement.

SPIEGEL: How do you explain the many visitors to museums?

Baselitz: The museums! They say that people are going there. I had two big exhibitions in Dresden, but no one went. There are plenty of tourists on the street in Dresden, but they’d rather go to the Green Vault (museum) or to see the Old Masters.

On Günter Grass, for some reason:

On selling paintings, which (surprise!) he doesn’t mind so much:

SPIEGEL: The art-selling business has gone crazy. The gallerists who sell your works — including Larry Gagosian, the world’s most successful gallerist — must be constantly asking you for more paintings. Is this a dilemma for someone like you, who demands quality and depth?

Baselitz: No. It’s not a dilemma, and why should it be? It’s really an ambition. I want to be part of it, to be young and belong. That has always been what I wanted.

The big take away here is Mr. Baselitz’s unfortunate commentary on female artists. Here’s the exchange:

SPIEGEL: Always? The market only embraces a few women. There are hardly any women among the most expensive artists.

SPIEGEL: What’s that supposed to mean?

Baselitz: Women don’t paint very well. It’s a fact. There are, of course, exceptions. Agnes Martin or, from the past, Paula Modersohn-Becker. I feel happy whenever I see one of her paintings. But she is no Picasso, no Modigliani and no Gauguin.

Baselitz: Not supposedly. And that despite the fact that they still constitute the majority of students in the art academies.

Don’t worry fellas, Mr. Baselitz thinks you’re all a bunch of bums, too:

“I think the defect actually lies with male artists. Male artists often border on idiocy, while it’s important for a woman not to be that way, if possible.”

The interview ends not long after that, presumably so that Mr. Baselitz can yell at a group of neighborhood children who threw their ball into his yard.