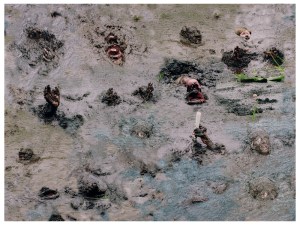 Gilad Ratman. Video still from The Boggyman, 2008. (Courtesy of the artist and Aspect Ratio, Chicago.)

Israel has chosen Gilad Ratman, its youngest representative yet, for this year’s Venice Biennale, according to a press release from his alma mater, Columbia University. [This was announced in March 2012, before we started keeping careful track of all the biennale representatives. —Ed.] Mr. Ratman, who was born in 1975, studied at the Bezalel Academy for Art and Design in Jerusalem and the School of Visual Arts in New York before getting his MFA from Columbia’s School of the Arts. The video and installation artist divides his time between Tel Aviv, where he is represented by Braverman Gallery, and New York, where his work has been included in group shows like MoMA PS1’s 2010 “Greater New York” exhibition. Though information on the nature of Mr. Ratman’s Biennale project is not available, his video work often features amphibious-looking humans wading through primordial ooze and swampland. Perhaps similar imagery or some of the themes mentioned below in Mr. Ratman’s artist statement for MoMA PS1 will grace the Israel Pavilion.

“My videos and installations aim to deal with untenable aspects of human behavior by exploring the appearance of pain, struggle and the wild. Pushing narrative to its borders and allowing for a fractured chain of events to take place, functions as a vehicle for me to explore the friction between the real and the imaginary. Violating the correlation between cause and effect, my videos undermine trust in the cinematic apparatus, and opening a space for the poetic and the pathetic to coexist.

I see my work as a political attempt to subvert the cultural mechanisms that generate meaning and the language by which we engage reality and to position myself as an opposing force to the obsessions with ‘nowness’ that is expounded by the media and the dialectic binary approach endorsed by it.”