The Waldorf’s artisanal honey is getting buzz.

The Waldorf-Astoria Hotel is currently cultivating a new kind of honey for its kitchens and bars. The hotel, where President Obama stays when he is in town, is used to painstaking attention to detail and extravagance, which makes its approach to the honey all the more intriguing.

Rather than relying on what could be called the Masa Imperative of luxury, after the top-dollar sushi joint that ships in fish from the Sea of Japan and the Bay of Spain with the urgency and costliness of helicoptered transplant organs (indeed, some of the fish are carried in organ containers), the Waldorf has gone in a direction more evocative of the Brooklyn Flea Market: its honey comes from beehives it is now keeping on a 20th-floor outdoor patio.

The initiative, brainchild of executive chef David Garcelon, relies on the expertise of the city’s premier beekeeper, Andrew Coté, who sells his own neighborhood-specific honeys at the Union Square farmer’s market.

“It sounds like a Portlandia skit,” said restaurateur Taavo Somer, considered by many to be the proto-Brooklyn hipster.

Like other aristocratic brands, the Waldorf is figuring out how to embrace the wildly popular (and youthful) do-it-yourself aesthetic that has gripped broader, scruffier swaths of the market.

Refinement and crispness are suddenly handicaps. The new aesthetic is sometimes referred to as “rough luxe,” bedhead writ large.

Upper East Side stylists, personal shoppers, private concierges and boutique proprietors describe the Waldorf honey as the latest in a sea change in luxury aesthetics, which has come largely as a response to what they perceive to be over-licensed, over-distributed, over-accessible luxury brands. If the devil wears Prada and the devil wears glasses, the devil is in luck: Prada frames are available at LensCrafters. Versace is on the racks at H&M.

“Used to be you could just run up Madison Avenue and Fifth Avenue scooping up things at Louis Vuitton and you were done. Now it’s meeting the artist and having a relationship and knowing the whole story about how she made it. It’s luxury with soul,” said Aviva Stanoff, whose handmade pillows sell for up to $500 at Barneys, Fred Segal and Saks Fifth Avenue.

“The Louis Vuitton stuff—I’m picking on them, but it’s all of that: Prada, Armani, whatever—is so easy and kind of nouveau-riche. It’s obvious. It’s not interesting anymore. So now we want more of an adventure. Upper East Side women love to have almost a safari in Brooklyn, to walk through my studio and the piles of fabric and little threads or feathers clinging to their Chanel.”

“Paris, London, Milan, even Tokyo, it all looks the same, everything so recognizable,” she said. “Two beautiful women walk into a room. One, you can tell head-to-toe what she’s wearing. The other is a mystery. Nothing pleases a woman more than people asking, ‘I love that. Where did you get it?’”

Jesse Garza, co-founder of Visual Therapy, a luxury lifestyle consultancy, said his clients are in search of “realness, and not the kind of realness that applies to Real Housewives.”

“None of my clients want Christian Louboutin shoes anymore, because the Kardashians are clomping around in them at breakfast,” he said. “What my clients want now is that thrown-together, put-together look of Jackie Kennedy Onassis.”

Mr. Garza pointed to the recent popularity of a $3,010 heavy knit sweater that was part of Chanel’s latest spring collection, a notable departure from the brand’s classic flat jacket. At a recent show, Karl Lagerfeld, Chanel’s creative director, bragged that it took 3,000 hours—125 days—to hand-embroider a sleeveless coat.

While bespoke has always had cachet, handmade has become an obsession in fashion; witness the likes of Salvatore Ferragamo’s blousons of interwoven leather and raffia inspired “by the art of manual knotting threads and plaiting straw.”

“We’re seeing more traffic on the road less traveled,” said Scott Schramm, Henri Bendel’s senior vice president in charge of general merchandise management. “It’s definitely quirkier, more independent, more imaginative. Our girl is more curious, and when you have curiosity, you have more confidence too, more uniqueness; it’s almost rediscovering that luxury is about specialty, not a uniform.”

He said buyers and customers were not only embracing brave new merchandise, but brave mixes and matches as well, specifically citing the pairing of a traditional Hermès bag with a Tom Binns cuff. Those cuffs are almost Damien Hirsts: a gold-plated shark mandible, a bejeweled oversize silver safety pin and, for 2013, a hulking gold-plated hammer-and-nail cuff.

Meanwhile, the status of a Tiffany engagement or wedding ring has been challenged by the likes of Sam Abbay, who runs a make-your-own-wedding-ring workshop in the Financial District and whose client base has shifted from Brooklyn to Manhattan in recent months.

“Tiffany’s or Harry Winston or Cartier, they’re selling rings they’ve already had designed,” said Mr. Abbay. “You can mix and match this carat or this cut or this setting, but it’s not that much variety. I mean, isn’t that how they do things at Chipotle? Lots of the city’s richest women have pretty much the exact same symbol of their husbands’ love.”

While the Waldorf eschews the exotica of Yemeni Wadi Do’an or Sidr honeys, the most expensive honeys in the world, it is doubling down on its newfound folksiness: Mr. Garcelon, its executive chef, explained plans to expand the beekeeping patio to include herbs and vegetables. But first, he plans to develop a private, locally sourced cheese label as a honey pairing.

Mr. Garcelon cast the decision as a mix of ancient tradition and modern environmentalism: “Sure, it’s great for the environment, for local pollination, for our guests to know that it is made right here. But it’s also great for me in the kitchen; any really old recipe from Europe was made with honey, not sugar. So we get to return to that real flavor: honey in soup, honey in salad dressing, honey in ice cream.”

If not for the nine-foot, two-ton, 119-year-old bronze and marble clock sounding Westminster chimes every quarter-hour behind him, the conversation could have been happening in Brooklyn’s Park Slope Food Co-op.

“The other day, an older man, the kind who wouldn’t be caught dead with Chanel because that’s too nouveau-riche for him—old-school, real true Upper East Side—was name-dropping a restaurant on Smith Street,” said Jonathan Butler, founder of Brownstoner.com and the Brooklyn Flea Market, who grew up on the Upper East Side and said he went to Brooklyn “maybe five times” before he was 21. “I was amazed that Brooklyn was even part of his universe.” 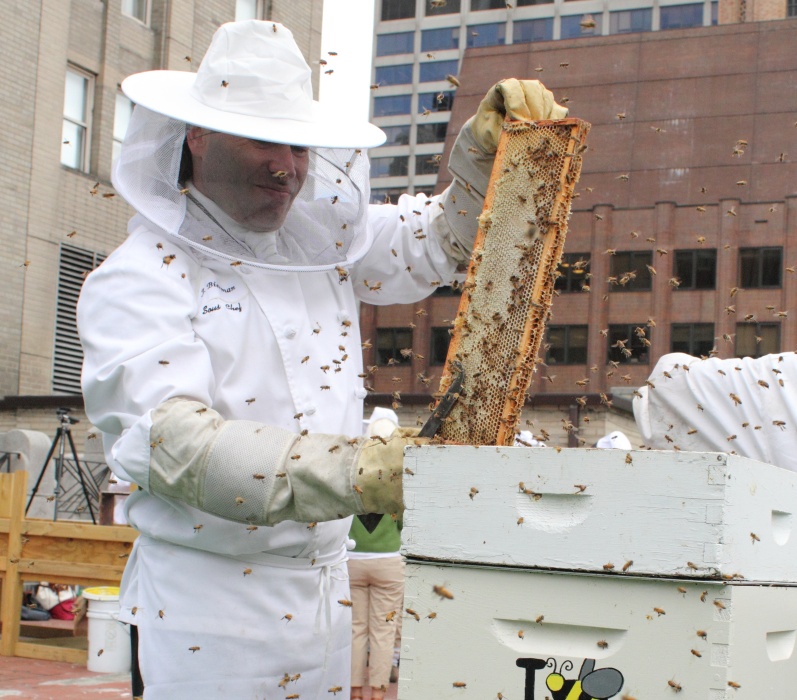