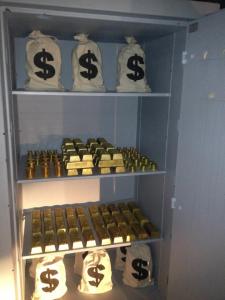 There were many parties during Art Basel Miami Beach in December, but only one with chocolate bars shaped like gold bars, as far as we know. Presented at an event at the Cisneros Fontanals Art Foundation’s space in Miami, those fine bars were the work of artist Carlos Garaicoa, who teamed with pastry maestro Guido Mogni of Sant Ambroeus on the project.

And who produced this delectable work? None other than Kreëmart, the estimable dessert-art enterprise run by art adviser Raphael Castoriano, whom we wrote about a few months back. The group just released a video of the whole project.

Have a look below!