“The evidence of record indicates, clearly, that Senator O’Toole called Judge Costello on May 2, 2012 to discuss the reappointments of several Essex County Superior Court judges whose nominations for reappointment were in jeopardy,” the Advisory Committee on Judicial Conduct report determined. “The mere fact that this telephone call occurred, however, is not itself evidence of judicial impropriety, but rather consistent with the past and present practice of the three branches of government in respect of judicial reappointments.”

The advisory committee worked cooperatively with the Office of Attorney Ethics (OAE).

“Though it is undisputed that Senator O’Toole called Judge Costello concerning the reappointments of several Essex County Superior Court judges on May 2, 2012, there is no evidence to substantiate the allegation that during that conversation Senator O’Toole told Judge Costello the success of any jurist’s reappointment was dependent upon Senator Gill’s agreement to ‘sign off’ on a particular judicial nominee,” the committee reported to the Supreme Court. “There is, likewise, no evidence to substantiate the allegation that Senator O’Toole directed Judge Costello to ask the judges awaiting nomination for reappointment to communicate with Senator Gill and advise her to ‘sign off’ on any judicial nominee.”

The committee said while it is undisputed that Judge Costello met with [the judges facing reappointment] and their presiding judges following her telephone conversation with Senator O’Toole on May 2, 2012, “there is no evidence to demonstrate that during those meetings she informed any one of them that their reappointments were dependent upon their ability to convince Senator Gill to ‘sign off’ on a particular judicial nominee.  Indeed, by all accounts no such conversation occurred.

“Given the lack of any evidence to substantiate the allegations of judicial or attorney misconduct, the Committee has decided to dismiss this ethics grievance against the Respondents,” the advisory committee concluded, which the court in turn accepted. 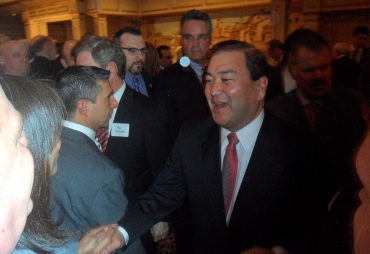