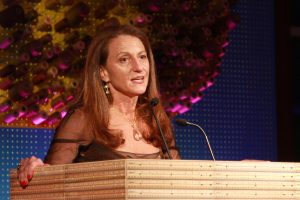 The director of the Museum of Arts and Design, Holly Hotchner, announced that she will step down on April 30, after 16 years leading the museum.

Ms. Hotchner oversaw MAD’s move in 2008 into 2 Columbus Circle, the 1964 Edward Durell Stone-designed “Lollipop” building that Brad Cloepfil of Allied Works Architecture renovated for the museum in a $110 million project.

“To be able to build a new museum in this city, already so full with culture, and to develop such a dedicated and growing audience is more than I had ever dreamed,” Ms. Hotchner said in a statement released to press. “On the occasion of the fifth anniversary of our new home, I feel that it would be best for the institution I have nurtured and love to build upon all that has been achieved and move forward into the future with new leadership.”

David Gordon, a former director of the Milwaukee Art Museum and secretary of London’s Royal Academy of Arts in London, has been tapped to serve as acting director until a permanent replacement for Ms. Hotchner is found.

Filed Under: Arts, museum of arts and design, Holly Hotchner