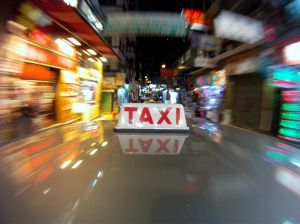 Photo taken on November 9, 2011 shows a taxi as it drives towards the Hong Kong skyline. As rush hour approaches the streets of Hong Kong, pedestrians can expect to bear witness to a familiar feeding frenzy as scores of shiny red scavengers compete for a sustenance of steady customers. With more than 18,000 taxis plying their trade to a population of over seven million, the night shift is a busy one. For taxi driver Alan Leung, the daily five-hour stint behind the wheel takes him from skyscrapers to street-corners as he traverses the tightly-packed territory in his bright red taxi. AFP PHOTO / ED JONES (Photo credit should read Ed Jones/AFP/Getty Images)