WASHINGTON, D.C. — For most Americans, the phrase Inaugural Ball conjures up images of the commander in chief and first lady clad in full evening dress taking a waltz on the dance floor. If you’d like to maintain that illusion of grandeur when 2016 rolls around, Politicker humbly suggests you stay home and watch the festivities on television, because the reality is far less glamorous. Last night’s main Inaugural Ball was like a low rent prom complete with a gym-like venue, chips standing in for hors d’oeuvres and 80’s music. Amid all these cut-rate accoutrements and incongruously overdressed guests, we also spotted a basketball legend, a dancing congresswoman and, of course, the president.

The route into the ball, which was held inside the Washington Convention Center, took guests decked out in black tie through a number of security checkpoints that left them waiting in lines stretching for blocks outside. Once in the ball, the situation wasn’t much better. Escalators took guests down into a cavernous hall that, apart from a few light displays and several presidential seals people lined up to pose in front of, had few decorations to disguise the fact the space was essentially a massive cement hangar.

Though the crowd was wearing their finest and paid about $200 for the privilege of attending, the only food they were treated to was two varieties of pretzels and Cheez Its on paper plates. We spotted at least one guest snapping photos of the chip buffet.

“No one is going to believe they had Cheez Its at the ball!” she exclaimed.

Those who wished to imbibe needed to endure a lengthy wait to purchase drink tickets before a separate long line at the cash bar.

Musical acts performed on a stage in one corner of the room, but you probably had a better view at home as most areas of the huge convention hall had no view of the stage and most ball guests were trapped in line for drinks long enough to miss a substantial portion of the show. Highlights of the concert included Alicia Keys, who performed a remixed version of her hit “Girl On Fire” that must have alarmed the Secret Service agents in attendance.

When President Barack Obama and his wife, Michelle, took the stage for their ceremonial dance, Jennifer Hudson performed a cover of Al Green’s “Let’s Stay Together.” Their appearance caused guests to surge towards the stage or any corner of the room where they could get a glimpse of the first couple.

Initially, we didn’t see any high-profile guests in the crowd, but after wandering the massive room we found a cordoned off area for “special guests.” This elite section of the ball featured the same sad Cheez It and pretzel spread, but at least the drinks were free. Like a vision from a fever dream, we suddenly saw Knicks legend Patrick Ewing, who seemed to be have the only celebrity in the crowd, attempting to order a drink at the bar while contending with a steady stream of fans asking for his photo.

We asked Mr. Ewing about the speculation he could join the coaching staff of the Brooklyn Nets in the wake of the team firing head coach Avery Johnson last month. Mr. Ewing, who coached in Orlando and Houston after his playing career, said he hadn’t heard from the Nets, but he would gladly take any coaching job.

Politicker also shared our personal story of giving up our Knicks fandom due to the way the team treated Mr. Ewing in his later years and eventually defecting to root for the Nets.

“I appreciate that,” Mr. Ewing said. Congresswoman Carolyn Maloney cutting a rug at the Inaugural Ball.

On our way out, we saw another familiar face, Congresswoman Carolyn Maloney, who was working her way through the crowd with her two daughters and a young man. Ms. Maloney grabbed our hand and pulled us along with her.

“You having fun or covering the event?” she asked.

When we informed her we were indeed covering the event she expressed her sympathies. A few moments later the DJ put on Madonna and when the pop diva commanded, “dance and sing, get up and do your thing,” the congresswoman dutifully obeyed.

“We’ve got to dance!” she shouted back to us as she spun away. 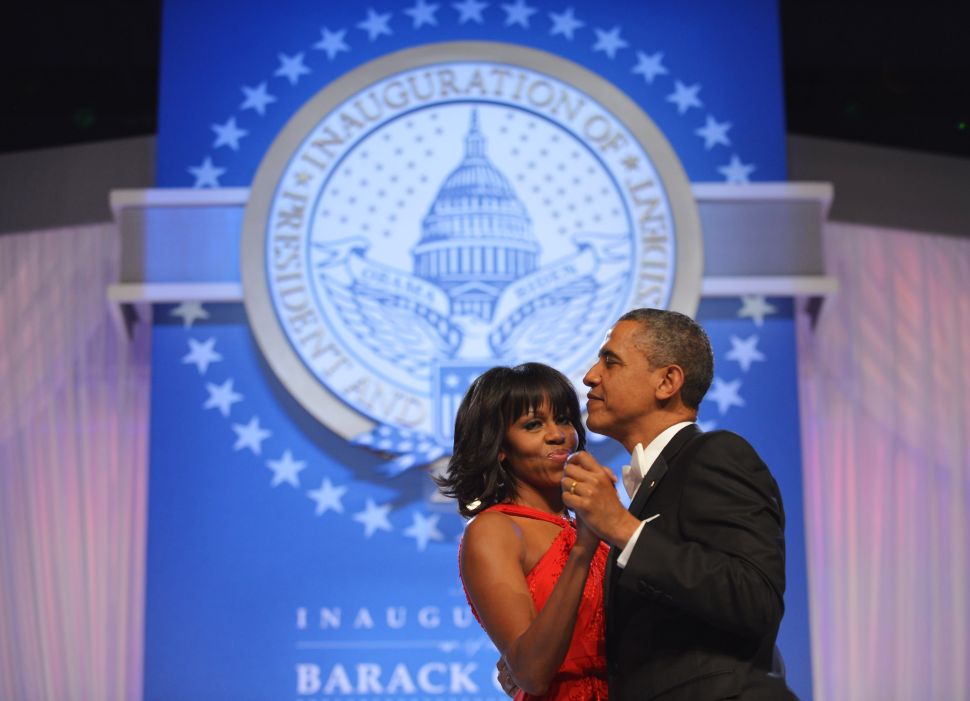