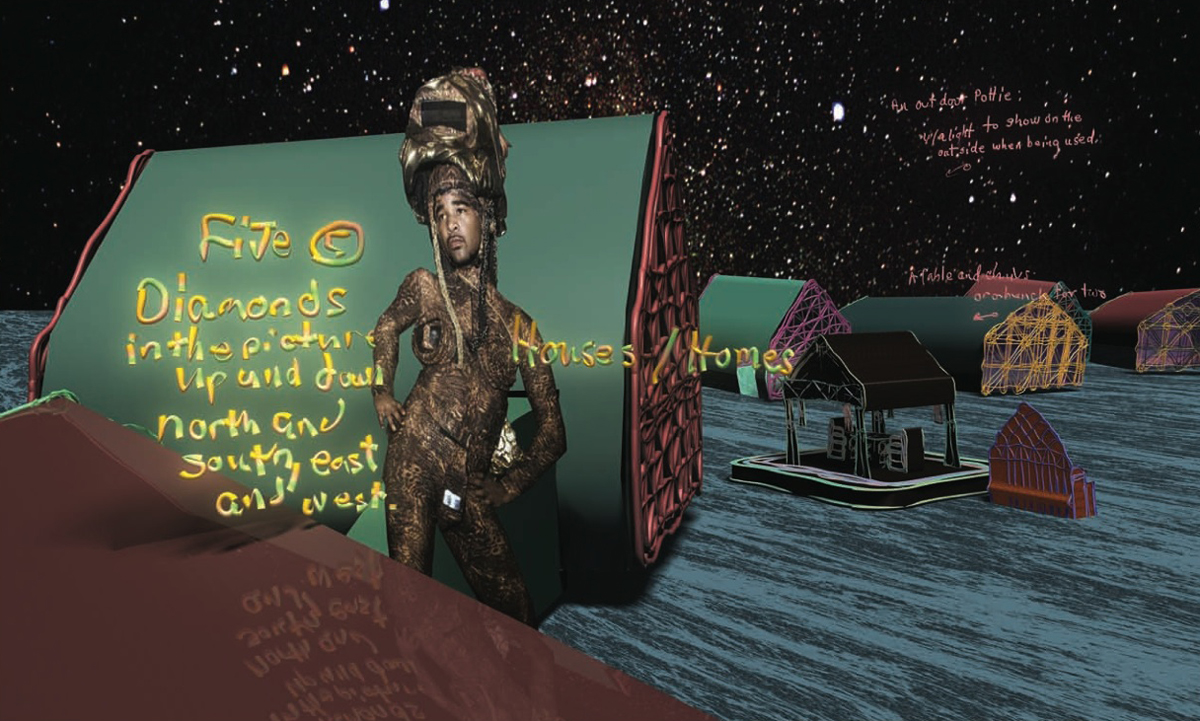 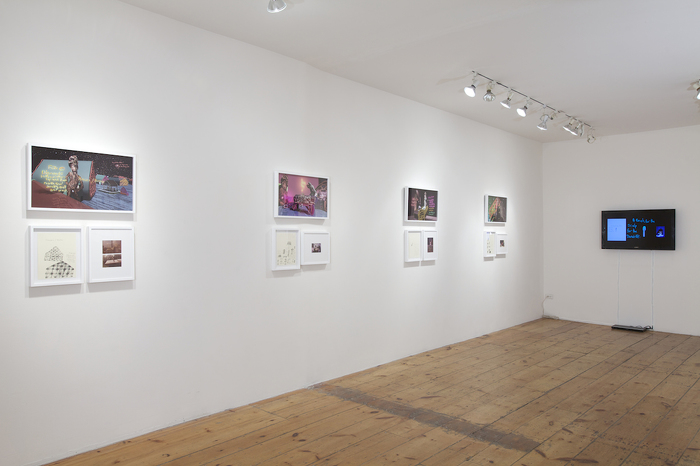 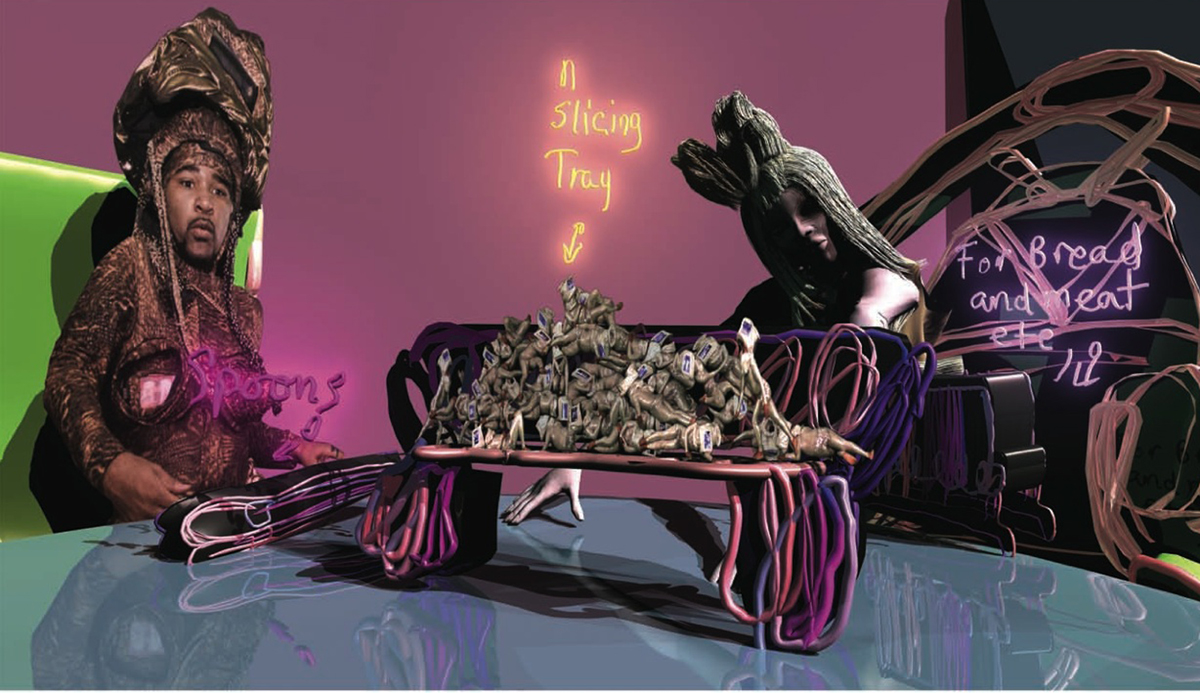 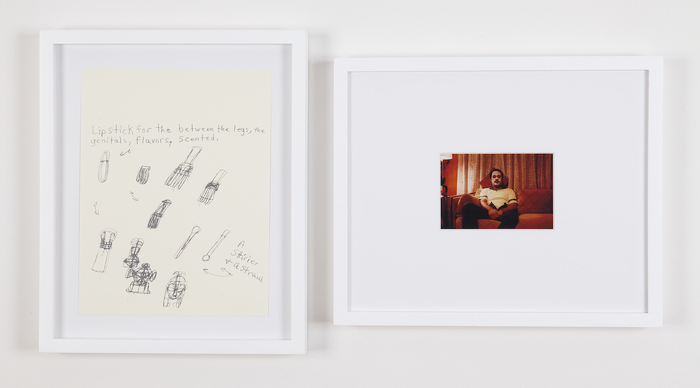 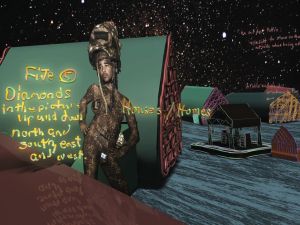 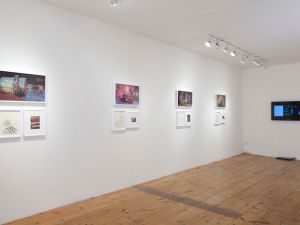 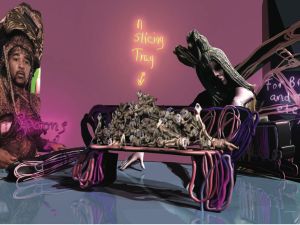 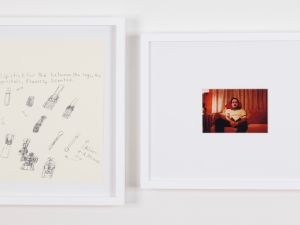 The first impression one gets from Jacolby Satterwhite’s solo debut, at Monya Rowe Gallery, is that he had one hell of a great time making these artworks. In a nine-minute animated video called Reifying Desire 5 (2013), he wears a skintight silver jumpsuit and fires lasers from his fingers as he dances and floats wildly around a 3D world that resembles what the online Second Life universe might look like if experienced on a cocktail of hallucinogens. One minute he’s coasting by Picasso’s Demoiselles d’Avignon (1907) and family photographs, the next he’s spraying water on nude women. At a particularly intense moment, an animated penis ejaculates little silver-suited Mr. Satterwhites.

Underlying this deliriously surreal, if somewhat unfocused, scene is a subtler story. Drawings of various inventions appear in the video—these are the work of Mr. Satterwhite’s mother, Patricia, who made them as part of her treatment for schizophrenia. She’s imagined a water tub in the shape of a seat, a special tray for eating watermelon, a levitating bed and car, and “lipstick for the between the legs,” to quote the text accompanying one drawing. Her hope has been to market them on the QVC shopping network.

Mr. Satterwhite has also turned her drawings into silk-screened prints that he has paired with old photographs of his family. Though they provide a backstory to their collaboration, they are not particularly memorable as discrete works. His mother’s sketches appear again as a series of 3D animations in another film, The Matriarch’s Rhapsody (2012), in which each product appears onscreen and spins in place, as if they are being sold on television. It’s an affecting display, mother and son collaborating to realize projects neither one of them would have been able to do alone, unrealized plans enacted as art.

At just 26 years old, Mr. Satterwhite has made a flawed but very strong debut; it will be exciting to see what he does next. In that electrifying video, Reifying Desire 5, he has a look of absolute determination, never seeming to so much as crack a smile, even as he engages in all sorts of mayhem, even as the virtual world morphs and decomposes around him. Such cool suggests an artist with deep reserves of humor and inventiveness. (Through Feb. 16)