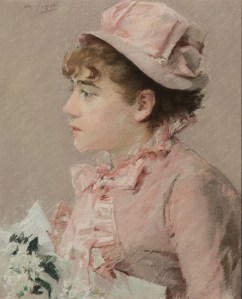 Both Christie’s and Sotheby’s saw unexpected gains and failures last night at their respective Old Masters sales, Albrecht Dürer: Masterpieces from a Private Collection and the evening session of Property from the Estate for Giancarlo Baroni.

At Sotheby’s, the biggest surprise was the runaway success of the evening’s final lot, La Demoiselle D’Honneur (1879), a pastel on canvas portrait of a pensive bridesmaid by Eva Gonzalés (the muse and sole pupil of Édouard Manet). Estimated at just $600,000 on the high end, the piece sold for over $2.5 million, setting a new record for the artist at auction. Meanwhile, the highest estimated lot, The Entombment of Christ (1571-72) by El Greco, fell short of its $1 million presale estimate, though it was still the third-biggest sale of the evening. Of last night’s 69 lots, 43.5 percent exceeded their estimates while 16 percent failed to sell. Results are pending for the second session of Sotheby’s Baroni sale, which started today at 10 a.m. and consists mostly of drawings and antique frames.