U.S. Sen. Frank R. Lautenberg (D-NJ) applauded President Obama for including measures the Senator has long championed in his recommendations for reducing gun violence in the United States.

Lautenberg’s legislation to ban high-capacity ammunition magazines holding more than 10 rounds — which he first introduced in January 2011 — emerged from recent conversations on gun safety reform as an effective solution and a reasonable proposal that could garner broad support.  Accordingly, the ban on high-capacity magazines holding more than 10 rounds is a major component of the President’s gun safety plan.

“I applaud President Obama for putting forward a bold, comprehensive plan to address gun violence in our nation that includes my common-sense proposals to ban high-capacity magazines and require background checks for all guns sold at gun shows.  With the President’s recommendations now on the table, we will get to work in Congress to pass my high-capacity magazine ban and other measures that can protect children and families from gun violence,” said Lautenberg.

“Reasonable reforms like a ban on high-capacity magazines would save innocent lives and help reduce tragedies like Newtown, Aurora, Tucson, Virginia Tech, and so many others.  Stronger background checks, including thorough reviews of all purchases at gun shows, need to be standard practice to keep guns out of the hands of people who shouldn’t have them.  These are reforms that the vast majority of the American public supports and the time has come to make them the law of the land.”

Lautenberg plans to immediately reintroduce his high-capacity magazine ban and gun show loophole legislation, along with other gun safety reforms, in the 113th Congress.

The legislation would prohibit the manufacture and sale of ammunition magazines that have a capacity of, or could be readily converted to accept, more than 10 rounds of ammunition.  From 1994 to 2004, high-capacity ammunition magazines were illegal as part of the Federal Assault Weapons Ban, which expired in 2004.  Since that time, high-capacity clips (holding more than 10 rounds at a time) have been legal to manufacture and sell.  Lautenberg first introduced his bill after a high-capacity ammunition magazine was used to carry out the shooting spree in Tucson, allowing the shooter to fire off 31 bullets in just 15 seconds.  The shooter was subdued when he stopped to reload.

The legislation would close the gun show loophole — a significant loophole in U.S. law that allows guns to be sold, even to criminals and terrorists, by unlicensed sellers at gun shows without conducting background checks.  It would require that background checks be conducted on all firearms sales at gun shows, even sales by private parties.

Lautenberg has been working to close the gun show loophole since 1999, when he first introduced legislation to require background checks at gun shows.  Later that year — in the wake of the Columbine tragedy, where three of the weapons were purchased at gun shows without a background check — the Senate passed Lautenberg’s legislation as an amendment to a juvenile justice bill.  The legislation passed by one vote, with Vice President Gore casting the tie-breaking vote.  However, the gun lobby killed the legislation in the House-Senate conference. 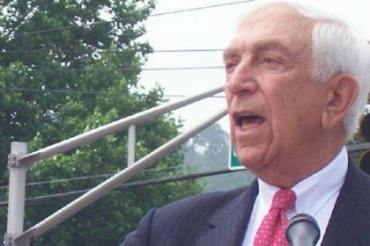