Earlier today, President Barack Obama unveiled a broad set of gun control proposals prompted by the wave of anti-gun sentiment generated by last month’s massacre in Newtown, Connecticut. Mayor Michael Bloomberg, a prominent gun control advocate, scheduled a press conference this afternoon to praise the White House for what he described as “a bold and comprehensive plan to tackle gun violence” that matches much of his own vision.

“Today it’s clear that the president and the vice president heard us and they heard the American people,” Mayor Bloomberg said. “The vast majority of Americans support common-sense gun regulations, and clearly, the White House was listening.”

“I’ve always thought that democracy really works. It’s the public’s responsibility, however, to express themselves and to say what they need,” said the mayor. “If they do that, if they do it respectfully, and clearly and repetitively, democracy will give them what is best for this country.”

The mayor continued by identifying specific elements of the president’s plan, which includes pushing for legislation banning the sale of new assault weapons and a set of 23 executive actions, that match proposals he has demanded through the organization he co-founded, Mayors Against Illegal Guns.

“On the legislative side, we asked for background checks for all gun sales and that is in the president’s plan, we asked for restrictions on military-style automatic rifles and that’s there as well, we asked for tougher penalties for gun traffickers, it’s in there,” Mayor Bloomberg said. “On the executive side, we urged him to appoint an ATF director, increase prosecutions for those who lie on background checks, direct federal agencies to fill in the gaps of the background check data system and remove restrictions on gun violence data and research, and the president is doing all of those things….I want to thank both President Obama and Vice President Biden for standing up and supporting these common-sense steps.”

After the mayor made his initial remarks, a reporter asked whether there was anything he felt was missing from the president’s proposals. The mayor said he might make some additions, but emphasized he was pleased with the plan overall.

Now that the president has released his plan, it remains to be seen whether Congress will pass his legislative proposals.

Mayor Bloomberg said he believes mayors, who “can best express what is appropriate for their communities,” and members of the public need to “seize this moment” and urge their congressional representatives to back the president’s gun control plans.

“We’re going to continue to need New Yorkers and Americans to keep explaining to members of Congress just how important this is,” said the mayor. “In all the time I’ve been working on this issue, there has never been greater public support for common-sense gun laws and it’s up to all of us to make sure that Congress hears that.”

Overall, the mayor expressed confidence that Congress would support the plan. 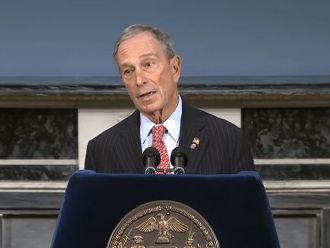