James L. Miller is many things, a motorcycle enthusiast, accused online scammer, doomsday prepper, gunmaker and cat lover. Christian Kerodin also wears a number of hats; he is an air conditioning repairman, blogger, author, self-styled security consultant and convicted extortionist. Both men also seem to be the masterminds behind a plan to build a massive, armed survivalist compound in Idaho that has been making national headlines.

According to the website of the Citadel, it will be a “community of 3,500 – 7,000 families of patriotic Americans who voluntarily choose to live together in accordance with Thomas Jefferson’s ideal of Rightful Liberty” and is being planned for Northern Idaho. Among other things, the designs for the Citadel include a “perimeter defense” with castle-style fortified walls and towers, an on-site gun factory, hotels, schools, a “firearms museum,” a “town militia,” jail and farmer’s market. As of now, the community is planned for Benewah County in Northern Idaho. Prospective residents of the Citadel are asked to submit to an application process that includes agreeing to participate in the militia and pass periodic proficiency tests with multiple types of firearms.

An illustration of the plans for the Citadel. (Photo: IIICitadel.com)

“Marxists, Socialists, Liberals and Establishment Republicans will likely find that life in our community is incompatible with their existing ideology and preferred lifestyles,” the website says.

Though the Citadel website claims the group has no “leader” and is the work of “scores of Liberty-loving individuals,” it appears Mr. Miller and Mr. Kerodin are two of the main forces behind the project. The roman numeral in the community’s name seems to be derived from “III Percent Patriots,” a blog operated by Mr. Kerodin where the early discussions were held planning the Citadel’s design and potential locations. An entry on Mr. Kerodin’s personal website describes the meaning of the term “III Percent Patriots.”

“Historians consider that about 3 percent of Americans took arms and challenged the King during the Revolution. 3 percent.  III Percent.  Threepers. Patriots. We exist today,” Mr. Kerodin wrote. “We are that percentage of Americans who have the tools and mettle of the Militiaman who stand and have drawn a hard line for the Hard Right of the political spectrum.”

Along with his political activities, Mr. Kerodin has also worked as a repairman for heating and air conditioning systems. In 2002, Mr. Kerodin started a security consultancy. The following year, he printed an eight-page analysis of terrorism weaknesses at shopping malls in the Washington D.C. area. According to reports from the time, he subsequently contacted mall operators in the area and told them they would be included in other similar analyses if they did not hire him to conduct security assessments. A concerned company contacted the Secret Service who had an undercover agent contact Mr. Kerodin who allegedly agreed to keep the business out of his reports after accepting a $120,000 check. He was arrested and indicted for an extortion charge to which he plead guilty. Mr. Kerodin was sentenced to 30 months in prison for the crime and an associated firearms charge. As a federal felon, Mr. Kerodin cannot own a weapon, but on his website, he says he is “exploring” legal avenues to “recover” his “firearms rights.”

In one of the Citadel planning posts on Mr. Kerodin’s blogs, a commenter using an online alias linked to Mr. Miller, “Millerized,” offers to bring his “firearm smithing” skills to the community. “Millerized,” is also one of the authors of the Citadel blog. In addition to being his online alias, “Millerized” was also the name of a company previously by Mr. Miller that originally made motorcycle parts. Last October, Millerized began doing business as “III Arms.” The III Arms website describes it as a firearms company “dedicated to building first-class fighting arms for the defense of Jefferson’s Rightful Liberty.” III Arms will have a factory inside the Citadel’s walls that is planned to be the prime source of revenue and employment for the project’s early residents. Mr. Miller is identified on LinkedIn as the “president” of III Arms.

In addition to Mr. Miller’s business activities, he has an extensive digital trail that includes “Millerized’s” participation in sites for self-described doomsday “preppers” and survivalists. On one of these forums, Millerized describes work done in his house where he has multiple cats. A web page tied to Mr. Miller’s name and address is also identified as having participated in so-called “phishing” scams on a site dedicated to identifying these fraudulent attempts to obtain personal information.

As of this writing, neither Mr. Miller or Mr. Kerodin have responded to multiple requests for comment on this story. However, Mr. Miller seems to be enjoying the attention the Citadel has recently received. A Facebook page that seems to belong to Mr. Miller features pictures of customized military fatigues with the III Arms logo and the words “Millerized” and “Patriot.” It also includes a picture of one of the Citadel’s more prominent media mentions, a headline about the community on the Drudge Report accompanied by the following caption from Mr. Miller: 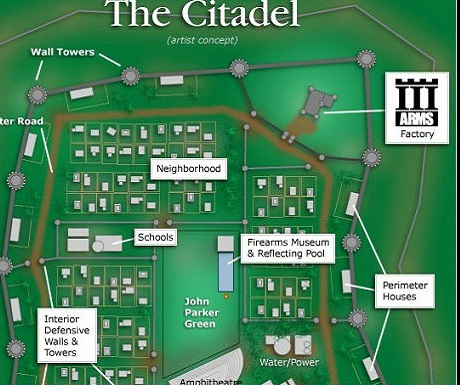