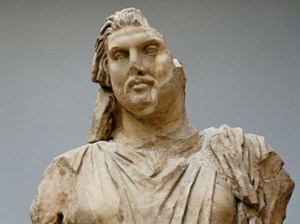 A statue from the British Museum that Turkey wants back. (Courtesy Wikipedia)

The Association of Art Museum Directors will, following a recent vote, enforce stricter rules about publishing photos of objects in their museums that may have been acquired through looting.

The New York Times reports that since 2008 museums have taken steps not to acquire objects unless there is proof that they were removed from the country prior to 1970. Many objects remain under disputed ownership, however, and it can be a source of headaches for a museum. Turkey, for example, has refused loans to Western museums until certain items are repatriated.

More from The Times:

Maxwell Anderson, the director of the Dallas Museum of Art and the chairman of the directors’ association’s task force on archaeological material and ancient art, said the change, made at the association’s meetings this week in Kansas City, Mo., makes the publication rule “really into a sunshine law now.”

“It gets the information out there, and if there are claimants then they can come forward,” he said.