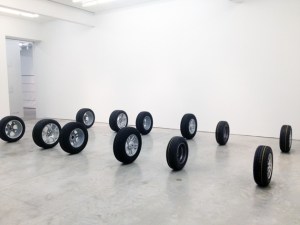 There are young to mid-career artists today who jump nimbly across mediums and delight in the rich phenomenological possibilities of found objects and images. They tend not to work in a recognizable style, but instead create artworks that are united by sensibility—sly, mysterious, ironic, poetic. Think of Ryan Gander, Darren Bader, Adriana Lara and English artist and filmmaker Nick Relph, who is currently having his second solo show at GBE.

One room of the gallery houses The Weather (all works 2013), three sets of automobile tires—two Ford, one BMW—arrayed in rows, as if the vehicles they supported had suddenly vanished into some sort of ether. Or are they somehow hidden in plain sight? It’s unsettling to walk through each rectangular set—you half expect to smack into a chassis. Manufacturers’ markings remain on the tires—bits of text and colored stripes that recall Fred Sandback’s string sculptures, which similarly use minimal means to create the illusion of immensity.

The walls of the next room are covered in the kind of white mesh netting found on construction sites, and a set of stanchions in the center of the gallery are connected with white bands made of silk and soy. This sense that the show is still in development is underscored by the fact that numerous works are titled TBD—to be determined. In one film projected on that netting, silhouettes of birds flutter on branches; another film takes the form of a slide show of simple but handsome collages—images of textures and various people (many fashion types) cut and pasted together or laid one on top of another (think Schwitters or Villeglé at their sparest) and then scanned into a computer. It’s accompanied by the sound of birds chirping.

Temporary walls in the space are coated with wallpaper showing book pages, two with various images of the moon. These pages, some stamped by the New York Public Library, come from digitized images made for Google Books, and the stray lines and washed-out sections that result from the scanning process look like painterly marks—1960s Martin Barrés made by accident and by computer.

In the slide show of collages and the wallpaper, Mr. Relph plumbs the spaces and overlaps between the handmade and the digital. (Are those slides collages or photos of collages, or both?). The tire pieces—which became instantly iconic when A-Rod showed one at his house in Miami last month—are similarly concerned with the gap between what we see and what we expect to feel, a particularly contemporary mind-body problem as everyday life careens toward the virtual. It’s not immediately clear what all of this adds up to, but you’re left with an intriguing frustration, a rare and pleasant bewilderment well-suited to the present moment. (Through Feb. 23, 2013)