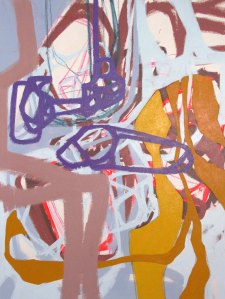 ‘No Longer Grounded’ (2012) by Justine Hill. (Courtesy the artist and Galerie Protégé)

Curated by Robert Dimin, this exhibition of work from half a dozen young artists who work or have worked for more famous elders is a disorienting foray into the anxiety of influence. It feels unkind to keep checking the press release to see who worked for whom—but on the other hand, that’s how they got you in the door.

Justine Hill’s knotty acrylic abstractions clearly relate to the work of her former employer Mickalene Thomas in their bright, direct colors and in the progressively fractional way they divide the canvas, but the tension between their cheerily slick surfaces and half-born compositional problems suggest that Ms. Hill will end up somewhere far away from Ms. Thomas. Mia Berg, who helps photographer Spencer Tunick assemble his nude crowd scenes, shoots herself as a solitary nude in more intimate outdoor settings and then displays the photos in “nichos,” ornate tin boxes more often used for Latin American icons. By doing exactly what Mr. Tunick does, she also does the opposite.

Diving headfirst into the commodification of in-group shibboleths is Mr. Dimin’s own contribution, several framed “studio exams” gamely filled out by applicants hoping to work for him. Instructed to draw a Malevich, everyone draws a square, but one applicant adds another short line parallel to one of the edges and labels it, “Pencil marks FROM THE UNDER PAINTING.” “What is the difference between Jayson Musson and Hennessy Youngman?” asks the exam’s last question. One of them is kidding. (Through Jan. 31)