Democratic Assembly Speaker Sheila Oliver tonight threw down the gauntlet in a potential U.S. Senate bid, saying Newark Mayor Cory Booker should not expect the nomination by virtue of his star power.

Oliver, who said last week she would not rule out a Senate run, made the remarks about the seat currently held by U.S. Sen. Frank Lautenberg, while standing just feet from Booker as the two were on hand for the New Jersey State Society’s inaugural ball.

Oliver said that Booker’s rollout of his Senate campaign has been lacking on the PR front.  He should be about issues, not celebrity, she said.

Oliver had a gentler tone for U.S. Rep. Frank Pallone, who also was on hand at the ball, but refused to discuss a potential Senate bid.

“I know Frank Pallone is interested in that seat and I would not (rule out) supporting him,” she said. “He’s labored in the vineyards for 22 or 23 years and I think that’s important for us in New Jersey.  If Sen. Lautenberg chooses not to run we lose someone who is a seasoned veteran on Capitol Hill.  I think there is a lot of legitimacy for everyone looking at Frank Pallone as a serious contender.”

Despite her comments on the race, Oliver said it is too early to contemplate the Senate bid.  The party must focus on the upcoming gubernatorial run before moving on to discuss a seat that is not up until 2014.

While Oliver said she is not ready to back a candidate, the search for an alternative to state Sen. Barbara Buono, to date the only declared candidate in the race, shows that women don’t get enough respect in New Jersey.

“I think what it shows you is that the women don’t get equal treatment. Everybody is foot dragging and saying ‘she will make us lose down-ballot races.’  I admire Barbara that she threw her gauntlet down and stepped out there.” 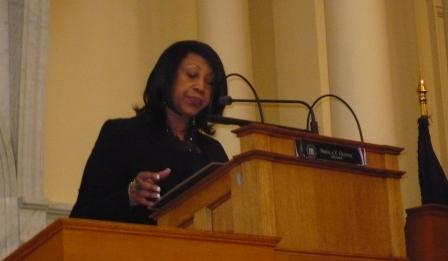