“In particular I am waiting for him to address big issues: immigration, gun control, healthcare,” Spencer told PolitickerNJ.com.

The Newark Assemblywoman went down to Washington, D.C. with a friend and described her second Obama inaugural as “very personal for me.”

From her position at 12th and Constitution, she said she could see a troop of 30 Newark Police officers in attendance at 10th and Pennsylvania.

“For me, the significance of the inaugural is, yes, he’s African-American, yes, it’s his 2nd term, but the significance is the country is turning, the attitude is changing. The issues he’s dealing with that he will address will ultimately impact the future of this country,” Spencer said. “His decisions will change the country.” 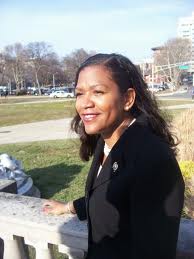