It’s what results from that diabolically irresistible cocktail of politics, business and booze that is this year’s Walk to Washington sponsored by the New Jersey Chamber of Commerce.

You didn’t have to walk far amid the elbows and nose to nose encounters to hear some variation on the words “Menendez,”  “he’s got a problem” and “it doesn’t look good.”

The incumbent U.S. Senator is battling headlines that put him on the plane of a donor and ultimately in the Dominican Republic allegedly cavorting with underage prostitutes.

“There’s  a lot of concern among Democrats,” acknowledged Patrick Murray, political scientist and pollster with Monmouth University. “If Menendez is forced to resign, Governor Christie gets to appoint his replacement. At first blush, this doesn’t look good for Menendez.

“The way this is unfolding right now, it gives credence to the story,” he added. “There is a concern that this could hurt down ballot when incumbents are vulnerable. It probably won’t happen but that won’t stop the Democrats from worrying about it.”

The Buono Campaign had wanted to project hoopla around their candidate for governor, and a wall of supporters jammed the New Brunswick Train Station to see state Sen. Barbara Buono (D-18) off on her journey to Washington.

But the Menendez story hounded the early alcohol blur mood aboard the jangling southbound train.

“It’s the unfortunate consequence of politics in the electronic age,” said Democratic State Party Chairman John Wisniewski. “The senator is forced to shadow box against hearsay.” 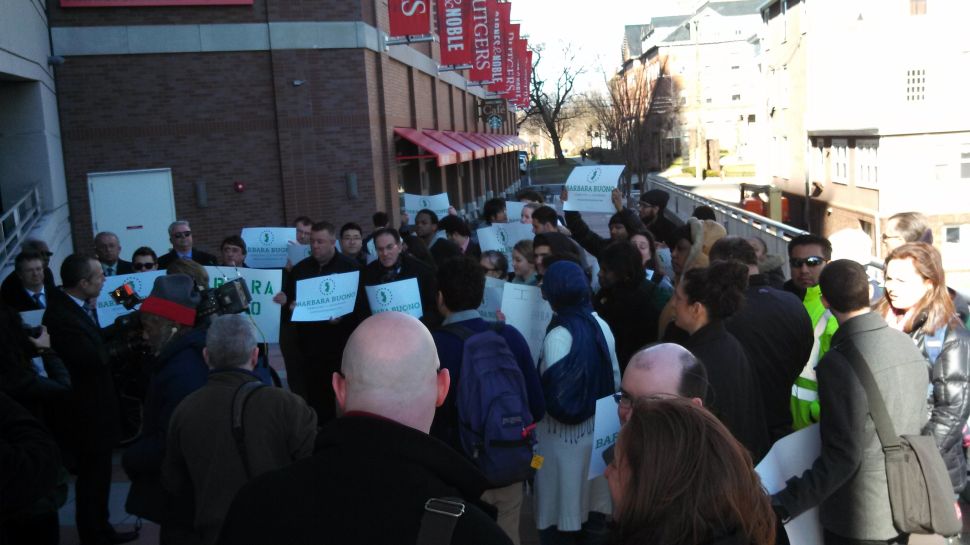