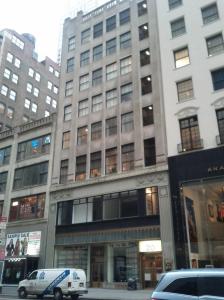 Peter Blum Gallery, which shows artists like Esther Kläs, Huma Bhabha and Superflex, is moving from its home on West 29th Street to a second-floor space at 20 West 57th Street that was once home to the Blum-Helman gallery (the latter was opened by Los Angeles dealer Irving Blum–no relation to Peter–and Joseph Helman in the late 1970s).

“Our lease was up here at 29th Street, and the owners had sold their building,” the gallery’s director, David Blum, son of Peter, told Gallerist by phone. “The new owners are planning to build a new structure.” In recent years, property values have risen in the West Chelsea, and developers have opened many tall condo buildings, with many more under construction.

Peter Blum opened its Chelsea location in 2006. The lot where the gallery leased its space in Chelsea was also home to the Sean Kelly Gallery, which moved north last year, to West 36th and 10th Avenue. Property records show that the full property, which measures 9,875 square feet, changed hands in November of last year for $24.7 million.

The gallery is currently renovating the Midtown space. It is comparable in size to the Chelsea location and has similarly lofty ceilings. “You don’t expect something like that at those addresses up there,” Mr. Blum said. The new space plans to open on Feb. 28 with a solo show by Rosy Keyser.

As if they weren’t busy enough with the move, the gallery plans to exhibit at no less than five art fairs in the next six months, showing work at the ADAA Art Show (a solo presentation of paintings by John Zurier) and the Armory Show in March, as well as Frieze New York and Art Basel Hong Kong in May and Art Basel in June.