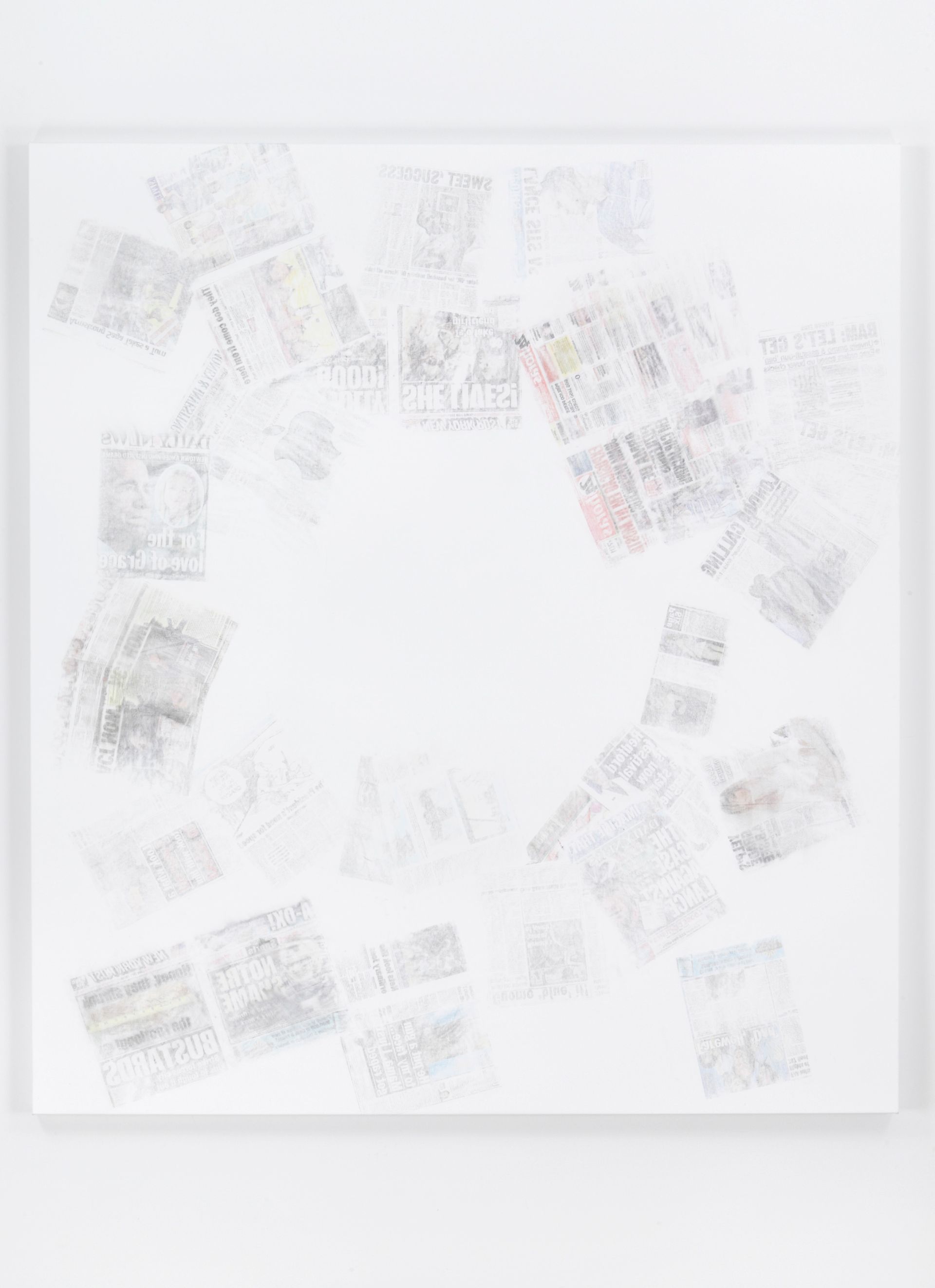 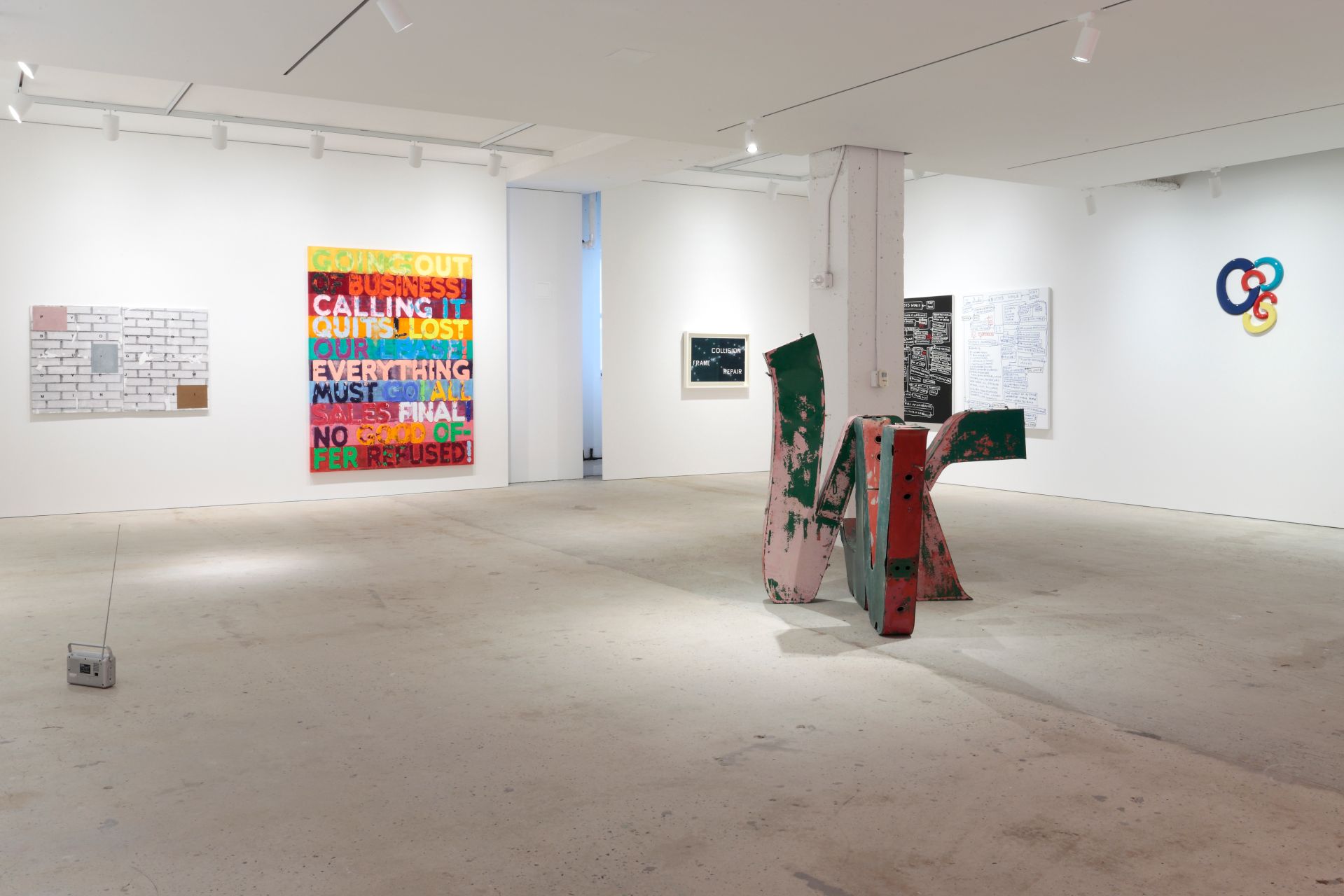 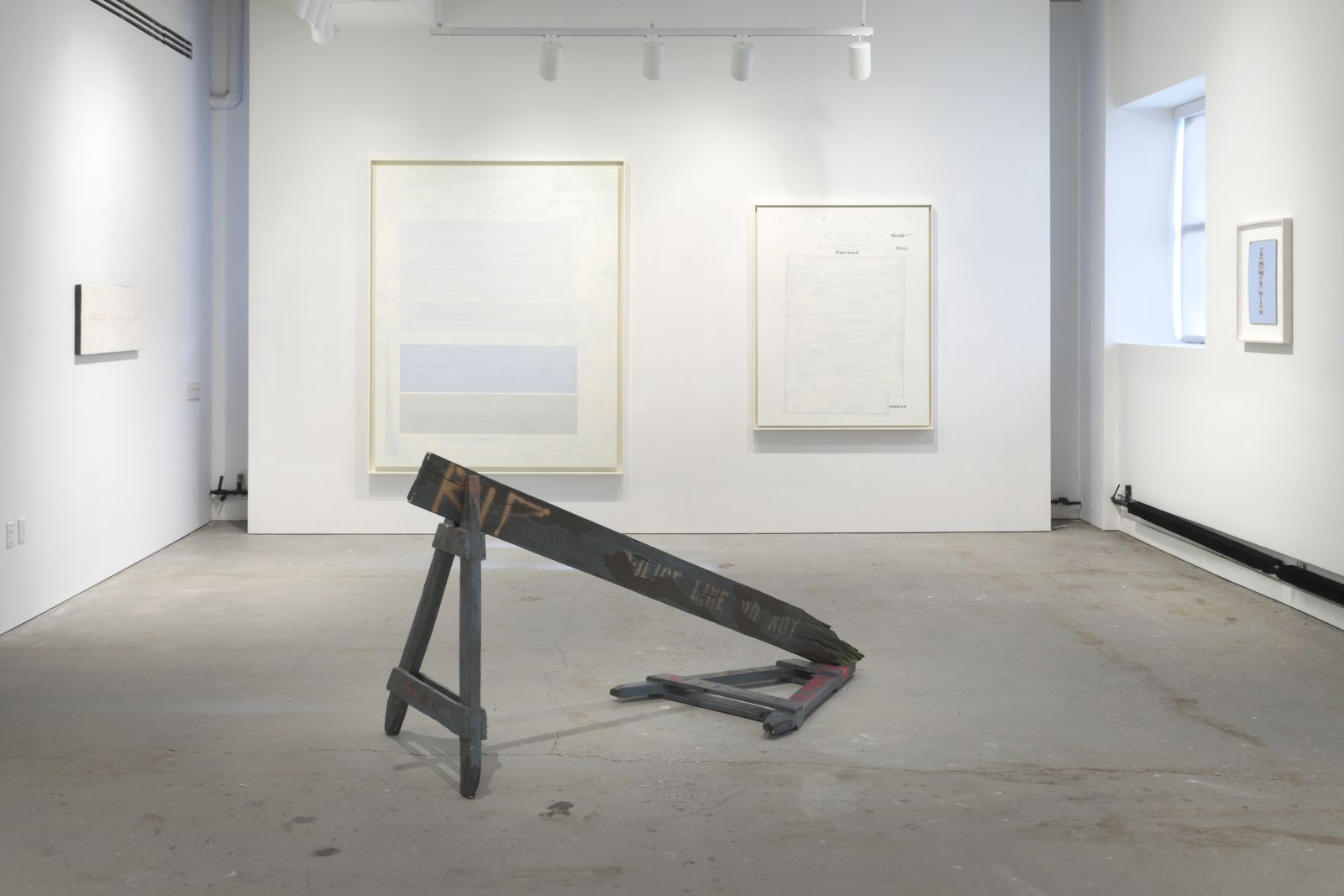 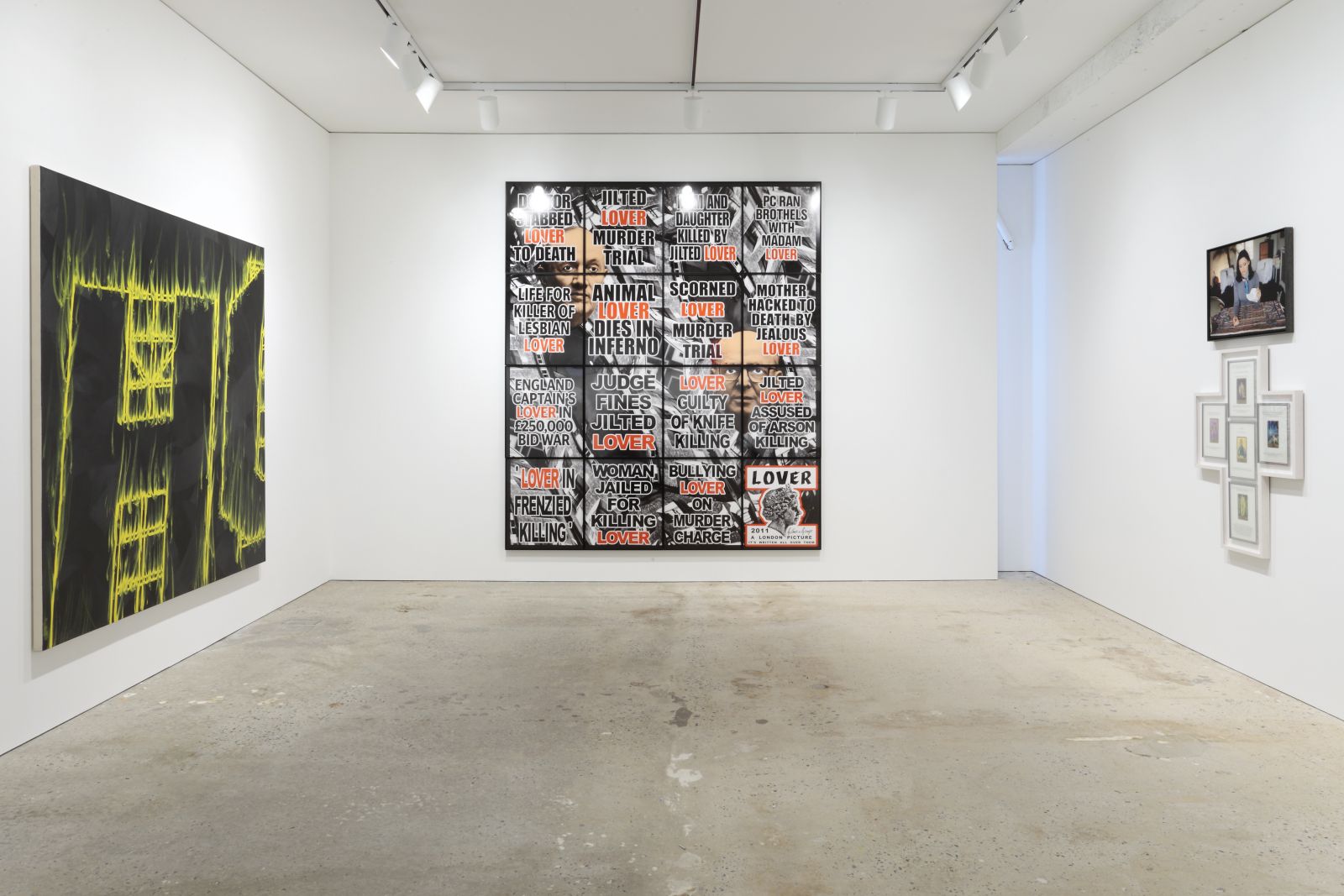 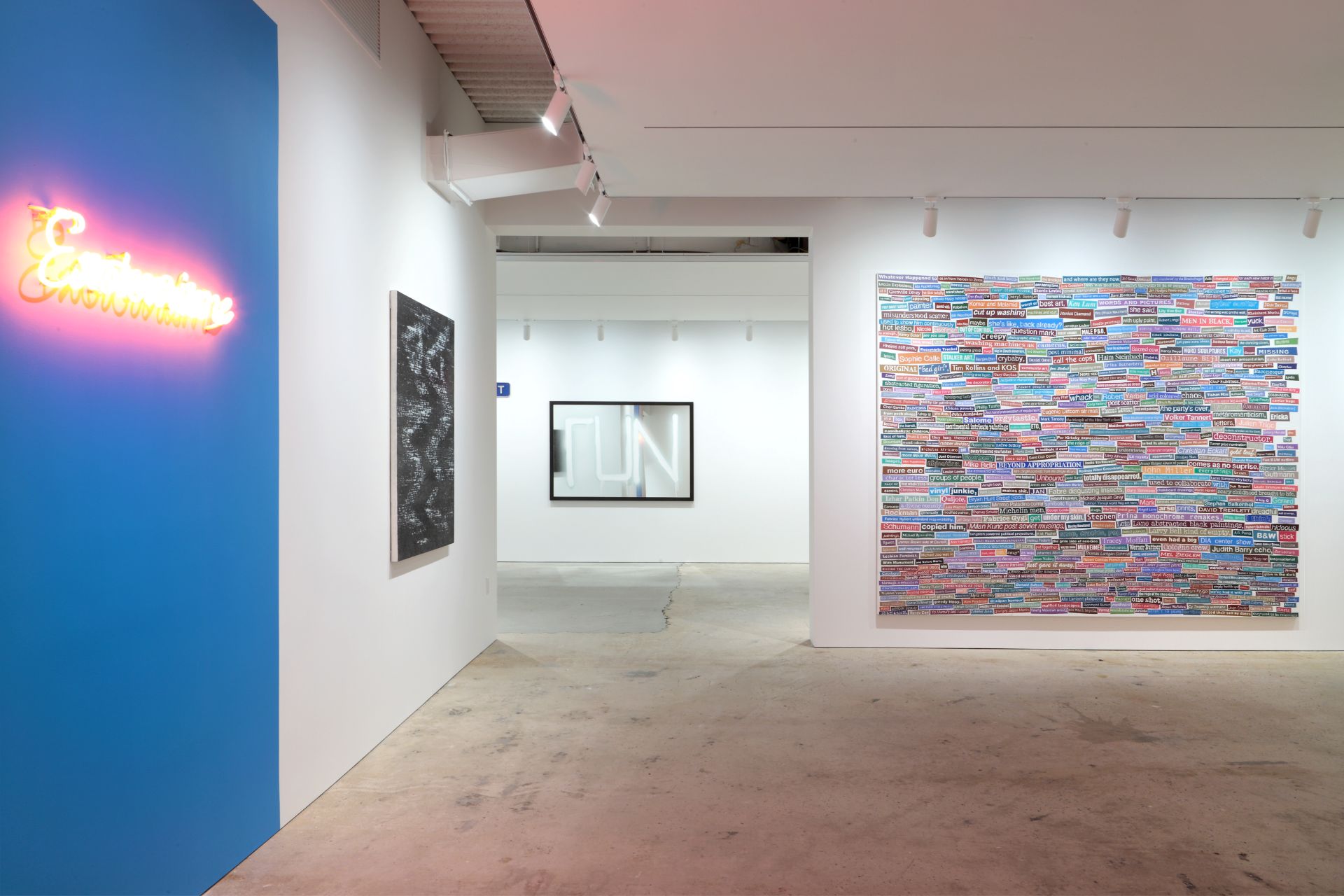 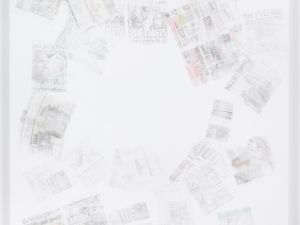 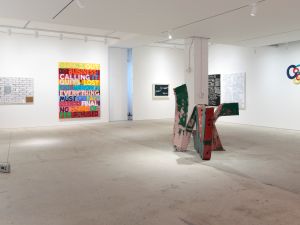 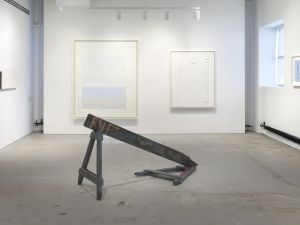 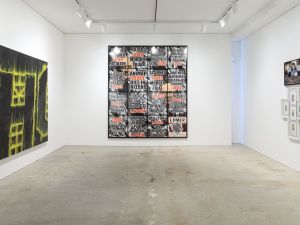 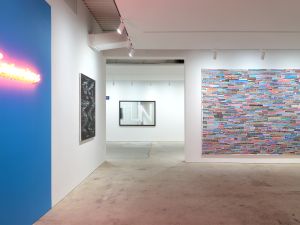 Kyle DeWoody does not have a favorite word, but she does have one she always uses for 20 Questions. (Hint: It’s smaller than a breadbox.) “Merkin!” she revealed with a grin.

“Who’s this?” asked collector Alberto Mugrabi as he studied Untitled (Tumbleweed) by the young artist Lucien Smith. Tabloid pages seem to swirl across the large gessoed canvas, and it was one of the most talked about pieces in the show. It appeared near work by Gilbert & George, Sophie Calle and Robert Gober in a brilliantly curated corner that centered around the role of language in love and scandal.

“I think you can never go wrong if there’s Gilbert & George in a show,” said sculptor Tom Sachs. The duo’s nearly 10-foot-tall piece, Lover, also made use of tabloid headlines, including gory screamers like “Mother hacked to death by jilted lover” and “animal lover dies in inferno.”

“Merci Mercy” was the first show in the gallery and you could smell the fresh paint on the walls. “When I found the space, the space did not exist,” said Mr. Roitfeld of what was once a couple of empty, unfinished industrial rooms.

Around 8 p.m., a dense crowd formed at one end of the gallery. Were they storming the supply of Veuve Cliquot kept in that corner? No, the poet John Giorno was performing, his white hair blending into the Jenny Holzers behind him. Even just a few rows back, it was impossible to hear much over the gallery chatter.

Cynthia Rowley arrived late wearing one of her own designs, a navy blue jumpsuit with sparkling clusters of costume jewels. She expressed concern that it was too much, but the crowd circulating through the space was a stylish one. Everyone, however, looked a little drab in comparison to Malcolm Harris, who in addition to blogging about art and style for The Huffington Post, said he is a consultant for the royal family of Qatar. Mr. Harris, who was wearing a black and white kaftan, camouflage army cap and an enormous faux-fur stole, was particularly fond of a Rashid Johnson mirror piece that garnered buzz throughout the night. “If I could fit it underneath this coat, it would be out of the room with me,” he confessed mischievously.

A few viewers felt a little lost in the contemporary scene. “I collect Abstract Expressionism, so I don’t really know what’s going on,” said one gentleman who was scolded for trying to “fix” Aaron Young’s Untitled (breaking the law), a bronze piece made to look like a collapsed wooden police barricade. “It was falling down and I tried to put it back,” he said.

Most of the crowd was on the same page, though. How did Mr. Mugrabi describe the show in just three words? “It’s. Fucking. Great,” he said with a laugh.