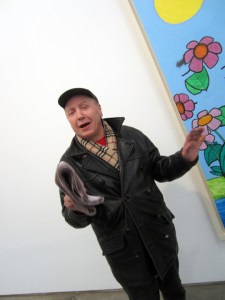 Simon Cerigo, a collector, curator, art dealer and fixture at gallery openings and art parties in New York, died on Sunday “after a brief illness complicated by heart issues,” according to a note posted by his wife Nancy Smith on her website, artloversnewyork. He was 60.

Mr. Cerigo was always on the outskirts of the mainstream, but he had an intimate knowledge of the art world. He was an early collector of a number of artists, including Jack Goldstein, Mariko Mori, Dan Asher and Walter Robinson, and worked at some point as a de facto adviser for many far more prominent collectors. He had a reputation for attending most openings in a given week, sometimes as many as 15 or 20 in a night.

“He would sometimes show up at the gallery in the middle of the day to talk about art,” said Paul Judelson, the president of I-20 Gallery in Chelsea, in an e-mail. “I remember seeing him once in Chelsea during the last week of August. Almost everybody was away on vacation, but Simon was walking the streets and searching for shows.”

“He was an aesthetic explosion every time you’d run into him,” artist and writer Walter Robinson said. “He was one of these weird art-world players. He knew everybody. He’d wear T-shirts and madras shorts in the summer and smoke pot. He’d talk about what he’d seen, what the prices were, what was good. The classic art lover.”

Mr. Cerigo was born in Paris–his mother was a doctor and his father was an economics journalist and they were both studying at the Sorbonne. The family moved to Montreal when he was a boy and Mr. Cerigo became a naturalized Canadian citizen when he was 10. He met his future wife while she was studying at Concordia University in Montreal. It’s unclear even to Ms. Smith whether Mr. Cerigo was ever actually enrolled at the school, but he did audit a number of art classes, eventually becoming the studio assistant of the Canadian abstract painter Guido Molinari, who happened to be Ms. Smith’s MFA adviser.

Mr. Cerigo arrived in New York in 1982 and Ms. Smith followed six months later. It was a time when the art market was booming. Ms. Smith remembers buying a David Salle print for $2,000 and being able to flip it in less than a year for 10 times that amount. In 1985, Mr. Cerigo opened his eponymous gallery on Avenue A, where he showed work by Ms. Smith, Mr. Robinson, Mr. Asher and many others. The gallery was an important part of the East Village gallery scene of the ’80s, but it was short-lived, closing for good in 1987. For many years, Mr. Cerigo got by selling work that he purchased early on for cheap.

“You could take Simon out for dinner and you could get a lot of information,” Ms. Smith said. “People who were buying and started making those careers that snowballed, they all talked to Simon.”

He never opened another gallery and mostly stayed off of other people’s payrolls, except in 2001, when he had a stint as the director of Daniel Silverstein Gallery on West 21st Street.

“He lived by the seat of his pants in the New York art world for almost 40 years,” said Charlie Finch, a critic and longtime friend of Mr. Cerigo. “The guy was built like a fucking ice house.”

In recent years, he was known for his frequent appearances on The Kostabi Show, the cable TV program hosted by the artist Mark Kostabi. The tagline is “A Gameshow Where Art Critics Title Kostabi’s Paintings for Cash Awards,” which is pretty much the gist of it. Contestants, which have included Glenn O’Brien, Carlo McCormick, Gary Indiana and others, could also get cash by answering art-historical questions, so it was an easy way for Mr. Cerigo to make a quick 20 bucks. He only missed two tapings since the show began in 2007 (originally under the name Title This).

“He quite proudly said he missed the one show because he was having sex,” Mr. Kostabi said, before adding sadly, “He missed last Friday, too.”

“Simon was always there and just wanted to be around people,” said Paul Kostabi, Mark’s brother who helps run the show. “He was there to have a good time.”

Mr. Cerigo is survived by Ms. Smith and their two children, Kate and Theo.