GOP Chairmen from Cape May and Cumberland counties pounced on state Sen. Jeff Van Drew’s (D-1) endorsement of state Sen. Barbara Buono (D-18), seizing on the developing goveror’s contest as a way of getting to the hisotrically ironclad bipartisan reputation of the incumbent South Jersey senator.

“Jeff Van Drew’s attack on Governor Christie today and his endorsement of the Governor’s opponent come as a great disappointment for the people of the First Legislative District,” Cape May Republican Chairman Mike Donohue and Cumberland County GOP Chair Robert Greco said in a release following Van Drew’s public support for Buono in a release.

“Chris Christie has been great for South Jersey,” said the chairs. “He fought for a 2% cap on local budgets, which has led to the slowest growth in property taxes in twenty years.  Governor Christie took on the most powerful men in Washington to ensure that our region obtains the federal disaster relief we need in the wake of Hurricane Sandy.  The Governor has listened to our concerns and helped us by making the DEP more responsive and helpful.  He has brought a renewed focus to the importance of the tourism industry that drives our local economy.”

Van Drew has been a key upper chamber cross-the-aisle Christie supporter during key battles, backing Christie’s budgets out of committee and supporting an overhaul of public worker pension and benefits.

“Yet, Jeff Van Drew wants to defeat Chris Christie in November,” the Republican chairs complained. “Not only did Van Drew endorse Christie’s opponent, he signed a statement attacking the Governor for ‘denying women access to critical life-saving health care services.’  These are the same old, worn out, untrue attacks that the Democrats used on Governor Christie when he was a candidate in 2009.

“It is extremely disappointing that Jeff Van Drew has jumped on the Democratic attack band wagon and joined in these smears against a Governor who has worked across party lines for the good of the people of South Jersey,” Donohue and Greco added. “It is a shame that Jeff Van Drew has chosen pure partisanship over what is in the interest of his constituents.” 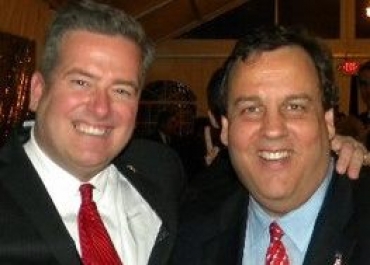