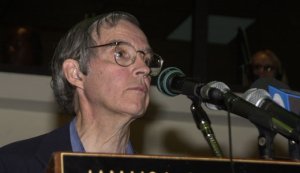 The Storm King Art Center in Mountainville, N.Y., announced today that James H. Ottaway, Jr. will be the next chair of its board of trustees.

A board member since 1986, he replaces H. Peter Stern, who stepped down this year. Mr. Ottaway is a former journalist, and senior vice president at the Dow Jones & Company, as well as a former member of the Dow Jones board. He opposed, and fought, Rupert Murdoch’s takeover of that company in 2007.

The release also mentions that the board has elected a new member, Ms. Roberta Denning. Congrats to all!