The Kean memo posits Sweeney’s district, LD 3, among others, as a battleground where Republican victory would help the GOP regain a majority in the senate.

“It’s Alice in Wonderland,” Sweeney told PolitickerNJ.com. “I didn’t spend two cents last time and I won (by eight points). Tell Tom to spend all of his money on me.”

Does Sweeney interpret that to mean a 2013 non-aggression pact between the governor and Democratic legislators who have worked to advance key pieces of his agenda?

Sweeney does not. “They want to win, and we want to win,” the senate president said. “You know what that means.”

Sweeney hasn’t yet ruled out his own run against Christie.

“I’ve told everyone that I’ll make a decision by the end of the month,” he said.

As part of a small business listening tour, the senate president took a tour of KMB Companies, a Wall-based engineering firm that employs 52 people.

Part of Sweeney’s purpose in highlighting the firm was to highlight state government’s failure to nimbly implement pro solar energy incentives backed by the legislature and signed by Christie. “We couldn’t react quickly enough,” Sweeney said. “We weren’t quick enough to adjust.”

That failure couldn’t stop KMB from taking advantage of Massachusetts’ incentives in solar. “It’s great you went to Boston, but I sure as hell would have wanted those six jobs here,” Sweeney told the company execs.

During the visit, “We don’t talk to real people enough to figure out what the problems are,” he added, referring to the Trenton political establishment.

In the company boardroom, Sweeney listened as partner Bruce Bowe told Sweeney to consider incentives for companies that maintain a workforce.

“It’s not a loophole because you’re keeping jobs,” said Bowe. In half a decade, “We doubled our workforce with no tax advantage.”

Hit by Hurricane Sandy, the company had to pay $80,000 to keep the power on to keep the business running.

“Government’s responsibility is maintaining power,” Sweeney said. “With the federal money coming in, we want to harden our infrastructure.”

It’s not all bad, he admitted, but government needs to do a better job of partnering with business.

During his meeting with KMB, Sweeney related a story about meeting with Panda Energy from Texas as they opened a 660-acre, 700-plus panel solar farm in Sweeney’s home district.

“This guy with a cowboy hat said, ‘I wouldn’t have thunk New Jersey could figure this out,'” Sweeney recalled. “I said, ‘Excuse me, you’re here.’ We have one of the best educated work forces in the country.” 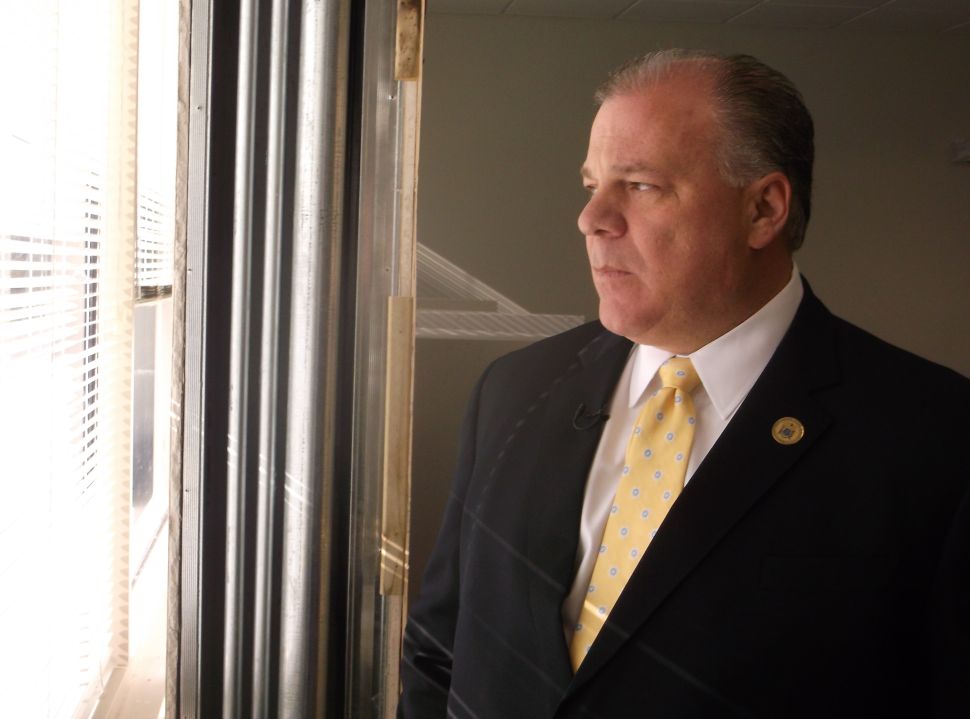