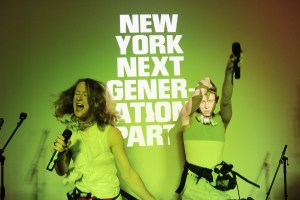 On Friday night downtowners crowded the New Museum for a very special edition of its Next Generation party hosted in part by Lauren Cornell and Ryan Trecartin, co-curators of the 2015 New Museum Triennial. At the ground level, attendees mingled with DIS Magazine media companions (those full-body-spandexed creatures who wear advertisements and like to pose for pictures), but for the most part the party took place on the museum’s top floor, where DJ sets were interspersed with performances by artists like Lauren Devine, a YouTube sensation, who, as it was painfully explained to an older attendee, doesn’t actually have that many hits for her videos. She doesn’t need them! Parody would be the wrong word, but she’s described her music as “Fro-Yo Pop,” like the music they play at Pinkberry.

Mr. Trecartin, and his ilk, tend to bring a certain style to parties like these, and their contributions remained the most memorable parts of the evening. Right by the coat check, for example, attendees were greeted with little bottles of what appeared to be urine, wrapped in the Chase Bank logo, each carrying the suggestion, in Chase font, that we “Taste.”

“It is locally sourced,” said Babak Radboy, the man behind the bottles, when we found him upstairs. (By that he meant he’d filled the bottles with water and food coloring in the museum’s basement, thankfully.) His collective, Shanzhai Biennial, focuses on the art of counterfeits and plans to soon partner with James Franco on making advertisements for a line of underwear they’d found in Chinatown, underwear featuring his name, for some reason, as if it were a real brand.

The media companions could be slightly off-putting, and even MoMA PS1 Director Klaus Biesenbach, who had them at the opening of Mr. Trecartin’s show there in 2011, said he wasn’t quite used to them. “I had my picture taken with Ryan tonight, because I am his curator,” he said, “And even I was a bit scared by them. It’s that they don’t have any faces, I think. They’re very inhuman.”

We’d spotted Gallery Girl Liz Margulies on the ground floor (and would have said “hi!” but couldn’t find you later!) and asked Mr. Biesenbach if he watched that show. He said he hadn’t seen it, or the other Bravo art show, Work of Art, because he doesn’t “know how to find programs on [his] television.”

Near the exit, as things wound down, a woman who worked for Calvin Klein solicited opinions on the name for a clothing line she wanted to start, and advised a man who works for Jeff Koons to get a colonic. The clothing line would take its name from a friend of hers who is Danish, and whose name is a homonym for a racial epithet in English. “I don’t know,” said the Koonsman, not so sold on the colonic. “What’s it like?”

A punk on his way to the door overheard the conversation and jumped in. “Oh man you’ve gotta try it,” he advised. “Have you ever done ecstasy? It’s like that, only way worse.”