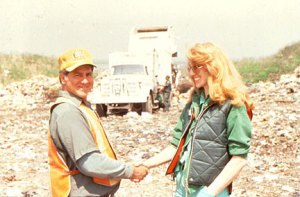 One thing I left out of my profile of Mierle Laderman Ukeles, the artist in residence at the New York City Department of Sanitation, is her short, though rather esteemed, past in the field of politics. She majored in international relations at Barnard, where she wrote her senior thesis about checks and balances in the history of the Tanganyika Territory, which would later form part of the United Republic of Tanzania (it was still a British United Nations Trust at the time). After graduating, she went back home to Denver and found that one of her sources for the thesis was a professor at the University of Colorado. She got in touch and he asked if he could use her thesis as a textbook in his classes.

“This was like the beginning of African Studies,” Ms. Ukeles told me. “So my thesis became his textbook.”

In December of 1961, President Kennedy sent a delegation to Tanganyika when it became an independent nation. Ms. Ukeles was part of it, and traveled on Air Force One.

“A very nice plane,” she said.

When Ms. Ukeles returned to the U.S., she ditched the political career and decided to go to art school instead.