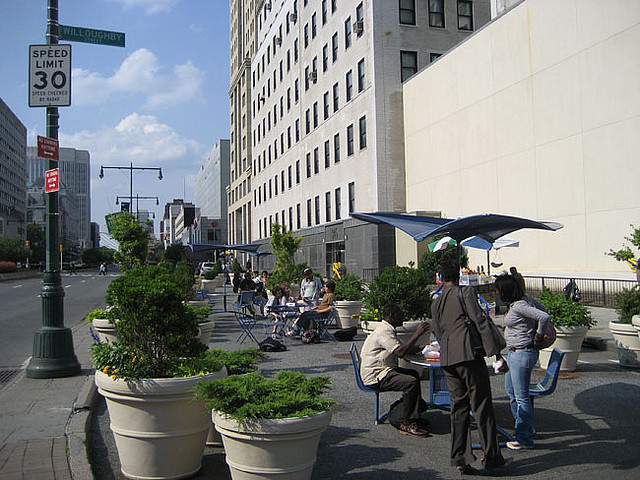 Previously, the plaza was just a blocked off 14,000-square-foot stretch of roadbed with some chairs, tables and planters. 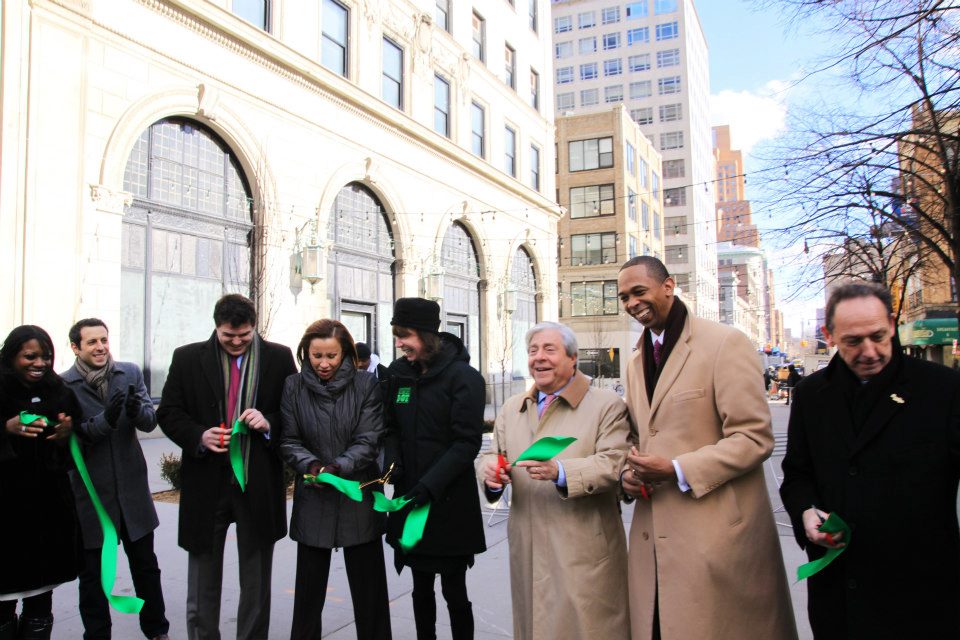 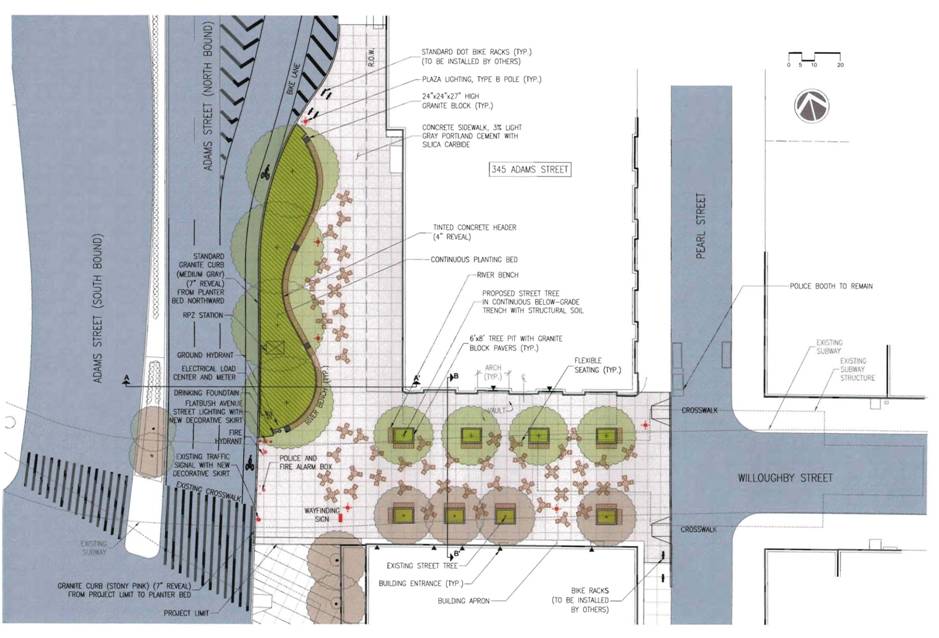 A diagram of the new plaza. 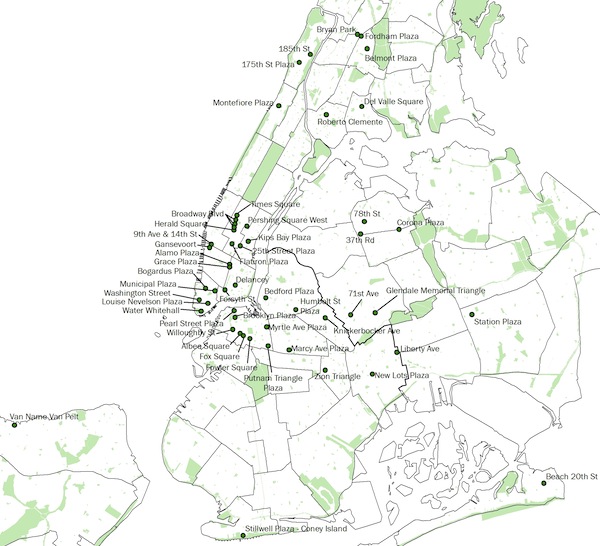 There are some 40 temporary plazas in the city now, with 16 in the design stage for becoming permanent. 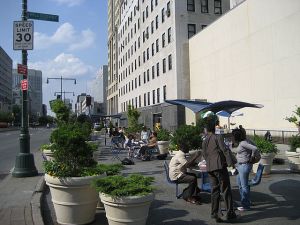 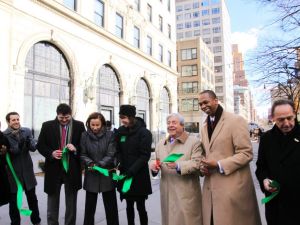 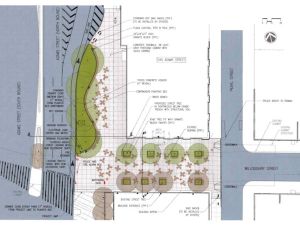 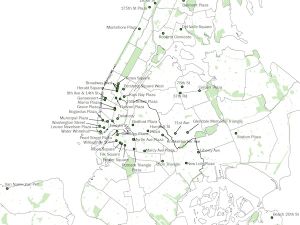 For the past six years, thousands of people a day have descended on a 150-foot long stretch of black top across from Borough Hall. There, nestled among planters and folding chair, Brooklynites and visitors, workers, students and tourists would all relax, meet up, hang out, maybe enjoy a shack stack.

Willoughby Plaza was one of the very first asphalt strips formerly dedicated to cars that was closed to vehicles, taken over and transformed into a space for pedestrians, helping to inaugurate the city’s popular if occasionally controversial NYC Plaza Program. Before Times Square and the Broadway Boulevard, before the new Grand Army Plaza or Fordham Plaza, before Janette Sadik-Khan even became DOT commissioner, there was Willoughby Plaza.

And now it is permanent, a thoughtfully designed, well-integrated piece of the streetscape rather than a bastardized piece of roadbed dressed up as well as DOT and the local business groups could manage. This is the dream for all 50 (and counting) of the city’s new temporary plazas, and 16 finished spaces are already in the works. But standing in the freezing cold with Commissioner Sadik-Khan and Brooklyn Borough President Marty Markowitz trading barbs, one wonders how many more plazas might be in store for the city.

“It’s a pleasure when the commissioner and I can be on the same side of a project,” the Beep said, a veiled reference to his disputes with DOT over the Prospect Park West protected bike lane, among others.

Past disputes aside, both agreed this was not only a boon for pedestrians but also shopkeepers and landlords.

“You saw the frenzy of new interest from retail stores and restaurants like Shake Shack and Panera Bread, and it’s just a wonderful sign of the energy that’s coming to the downtown streetscape,” Commissioner Sadik-Khan said. “It doesn’t take an economics degree to understand just how much pedestrian space can contribute to the bottom line of local businesses.”

“This is a new landmark for Brooklyn,” she added.

Congresswoman Nydia Velazquez, who helped secure federal funds to pay for the project, concurred. “This has already become a destination for people walking and biking over the Brooklyn Bridge from Manhattan, and this new plaza will bring more people here to stay,” she said.

After the ribbon cutting speeches—which lasted all of seven minutes, no doubt due to the frozen ears everyone was suffering from—Design and Construction Commissioner David Burney pointed out to The Observer that this is about much more than pedestrians, but involved a full overhaul of sewer and utility pipes and lines under the street. “It’s an infrastructure improvement as much as anything, and this is just the cosmetic side of it,” Mr. Burney said, gesturing around the plaza, which had new planting beds and christmas lighting strung from the trees but was otherwise little more than a very large and generous 14,000-square-foot sidewalk.

Inside Shake Shack after the event, Commissioner Sadik-Khan spent a few minutes discussing the future of the plaza program with The Observer. First off, why had it taken so long for this plaza to go from temporary to permanent? Five years is actually the average time for city capital projects to get approved and built, Ms. Sadik-Khan explained, once all the various agencies and approvals, contracts and designs are factored in.

She stressed that lots of community outreach, something she has emphasized with every one of these projects, as adding time, but time worth taking. Contrary to popular belief, the plazas are only installed after a community group or local business improvement district requests them.

“It depends on what the construction season looks like, but pretty soon, these are going to be popping up all over town,” Ms. Sadik-Khan said.

Various surveys, reports and community board votes have shown widespread support for most of these plazas. Still, some politicians have vowed to reverse the mayor and his street reshapers once he leaves City Hall. Is this program established enough to continue once Ms. Sadik-Khan and her cohort is gone?

“This is set in stone,” Ms. Sadik-Khan said, pointing out the window. “And all across town, the public is setting it in stone. If you look at the demand, at the applications that are in the door, there’s just no end in site to the number of communities that want more pedestrian space and more space to meet and sit down and create a more livable community.”

And it was not just local residents pushing for these new plazas. “You have to understand, the Downtown Brooklyn Partnership, working on behalf of the business community down here, has been pushing for this for years,” Ms. Sadik-Khan said. “And we’re seeing the same push all across the city. Businesses get it. They get that additional foot traffic is better for business.”