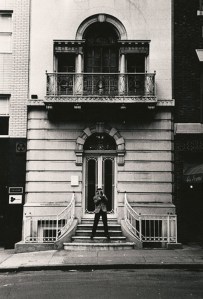 Seth Siegelaub in front of 44 East 52nd Street, which housed one of his shows. (Photo by Robert Barry, courtesy the Museum of Modern Art)

“There is no art without you,” Seth Siegelaub wrote in a draft of a letter to artists in 1970. “There is no art world without you. You have given up rights you probably do not know exist.” The Bronx-born Mr. Siegelaub was not yet 30 at the time, but over the previous decade he had already established himself as a trailblazing dealer and curator of conceptual art, offering for sale as artworks things that sometimes barely qualified as objects, such as the transmission of a radio wave (by Robert Barry) and text on a page (Lawrence Weiner). He had also become a committed activist. In 1969, he joined the Art Workers’ Coalition (AWC), a group of New York artists that lobbied to improve conditions and rights for artists working with museums and dealers. In a letter to the Museum of Modern Art, they made 13 demands, including that a section of the museum be placed “under the direction of black artists” and that artists receive rental fees for artworks loaned to MoMA for exhibitions. That letter is now on view at MoMA, which acquired Mr. Siegelaub’s papers in 2011 with his cooperation and has put a number of them on display. (The museum has also launched an excellent website with images of many of the works in the show. It has also released a guide to its contents.)

Titled after a line from a speech that Mr. Siegelaub gave to the AWC in 1970, the jewel of a show, consisting of archival material mostly from 1964 to 1973, is tucked away on the lower level of the Lewis B. and Dorothy Cullman Education and Research Building, so there’s no $25 ticket necessary—fulfilling the AWC’s unrealized demand that “admission should be free at all times.” (The AWC did help secure a free day at the museum.) Christiana Dobrzynski Grippe, a project archivist in the MoMA archives, organized the display, which is the perfect addendum to the Brooklyn Museum’s larger show organized around Lucy Lippard, another perspicacious conceptual-art leader, whose name and letters pop up in the Siegelaub papers.

The MoMA show begins in 1964, when Mr. Siegelaub was an art and Oriental rug dealer on 56th Street. Collaborating with conceptual artists on exotic projects of his own devising, he helped pioneer the role of the curator as creative agent, which today’s curators—Hans Ulrich Obrist comes to mind—have taken to even greater extremes.

For 1968’s Xerox Book, whose mockup title page is displayed, he asked seven artists to make work that could be photocopied, sensing the potential of the new technology. (Sadly, the cost was still prohibitive, and the first edition had to be offset printed.) The following year, he organized a two-room exhibition in an East 52nd Street office. In one room he displayed a catalog containing instructions for artworks; the other room contained those artworks’ realizations. Included in MoMA’s display of the documentation related to this show is a typewritten list of 13 instructions for the secretary. (Number eight: “Turn on both Robert Barry pieces.”) A photograph reveals that one artist involved in this was Adrian Piper, who would later adapt such conceptual strategies for artworks dealing with identity and racial politics.

That Mr. Siegelaub’s most ambitious project ended in failure does not lessen its impact, or its prescience. In 1971 he published the “Artist’s Reserved Rights Transfer and Sale Agreement,” written with lawyer Robert Projansky. Among other things, it aimed to guarantee artists a royalty in the event that their work was resold. Notes on display reveal that Dan Graham, Sol LeWitt and Ed Ruscha were all fans of the agreement, but the mechanisms of the art market proved intractable. (Today the German artist Maria Eichhorn is perhaps the only major artist known to use it.)

“This is a substitute for what has existed before—nothing,” Mr. Siegelaub wrote in a 1973 introduction to the agreement. It was a start. By that point, he had pretty much abandoned the art world to focus on collecting textiles. Forty years later, groups like W.A.G.E. (Working Artists and the Greater Economy) and the Occupy Wall Street Arts & Labor group are beginning to raise many of the same issues that Mr. Siegelaub and his colleagues did, calling for changes in the way the art world functions. Those preparing for the coming debates will find plenty to chew on at MoMA. (Through March 4, 2013)