“My phrasing may be too responsible, I don’t know.”

Bill Thompson, a candidate for mayor this year, was waxing philosophical last week about why his policy statements might not have the same pizazz as his competitors’ fiery pronouncements.

“If I had thrown an expletive in, maybe it would have gotten more attention. But then people would have to bleep it out,” he continued, sipping coffee. “Then it would be, ‘Bill Thompson, he doesn’t have the temperament to be the mayor of the City of New York!’”

It would not be long before Mr. Thompson’s spokesman, Ibrahim Khan, offered some less-than-serious assistance from across the table.

“We can get him to drop some F-bombs if you want,” he said. “If that’s going to make your story better, he can go on a tirade you haven’t seen! He’ll throw his coffee back. You know he’s just taking it easy right now.”

No tirade, no F-bombs. But Mr. Thompson was animated throughout a lengthy discussion. Lightly banging his fists on the table to punctuate his more expressive thoughts and even cracking a joke or two, Mr. Thompson, a former two-term comptroller, strongly pushed back against those who would depict him as boring and unenergetic.

“No one said I wasn’t working hard enough or didn’t have fire in my belly when I was comptroller,” he argued, pointing out that his main Democratic rivals—Council Speaker Christine Quinn, Public Advocate Bill de Blasio and current Comptroller John Liu—all hold the bully pulpit that comes with elected office. “Others are trying to paint a perception.”

Nevertheless, Mr. Thompson—59, bespectacled and with a tendency to speak methodically—doesn’t immediately crush the stereotype in his speeches and addresses. And, even though his father, William Thompson Sr., was a city councilman, a state senator and a judge at various points in his career, the younger Mr. Thompson said his upbringing was a lesson in public service rather than training in the hard-nosed nature of campaign politics.

“It was less about a political background than it was public service. My mother was a public school teacher,” he said of a youth spent in Bedford-Stuyvesant in the 1950s and ’60s. “It wasn’t necessarily force-fed; it was a little bit of osmosis. I remember my father’s Democratic club, their dinner dances. I don’t remember so much going, but my parents leaving to go. The Democratic club was around the corner from our house. I remember the people who used to be involved in community issues there.”

Mr. Thompson, now a Harlem resident and a municipal finance professional, would go on to serve in the offices of various government officials, as wells as stints as Brooklyn’s deputy borough president and as president of the now-defunct New York City Board of Education. He didn’t hit the campaign trail himself, however, until 2001, when he successfully ran citywide for comptroller.

But his main claim to fame isn’t his work as comptroller or on other levels of government. Mr. Thompson is most renowned for the mere 4.6 percent of the vote that prevented him from stopping Mayor Michael Bloomberg’s third term in 2009. Mr. Thompson was running against the headwinds of a billionaire mayor’s bottomless campaign war chest, and few gave him a chance until after the votes were tallied, making the closeness of the race all the more notable. He described how a false narrative ultimately contributed to his narrow defeat.

Mayor Bloomberg ultimately spent an eye-popping $102 million on his race, virtually all of it from his own pocket. With Mr. Thompson spending a total of about $8.3 million, the math is pretty compelling. Mr. Thompson spent less than $16 per vote, compared with Mayor Bloomberg’s stunning $175. And with the mayor’s lead nearly evaporating as Election Day approached, it’s not hard to see how just a bit more fuel in Mr. Thompson’s tank could have propelled the soft-spoken comptroller into Gracie Mansion.

Yet at some points in the race, Mr. Thompson didn’t do a lot to counter the perception that Mayor Bloomberg couldn’t be beaten. From demoralized campaign aides openly dismissing his chances to typos in press releases (most painfully, one that labeled the candidate “Thomson”), sources close to the electoral effort described an operation that didn’t really come together until the final stretch to Election Day.

“I think Billy is personable. I think that he has the ability to connect with people. I think that he actually has a decent policy-wonk side that doesn’t always come out, or doesn’t come out in the right ways,” one Democrat explained. “I think the standard knocks on Billy are also mostly true. He often does lack the passion to articulate the vision that the people will be excited about.”

“I appreciate what he does, his style. The issues that have sort of percolated out there: is there fire in the belly? People manifest desire in different ways,” Mr. Spitzer mused about Mr. Thompson’s character, noting that he has yet to endorse a mayoral candidate this year. “Not everybody is pounding the table. Not everyone is breathing fire. Billy has a sort of more deliberate, even-tempered, even-handed approach to things. Which should not be mistaken for a lack of passion or a lack of desire.”

Regardless, as rival political operatives are quick to point out, Mr. Thompson didn’t leave a large footprint, despite coming so close to toppling Mr. Bloomberg and spending a few million dollars in voter outreach in the process. In this race, a Jan. 16 Quinnipiac University poll had just 31 percent of the city’s voters expressing a favorable opinion of Mr. Thompson and 10 percent unfavorable. The other leading Democrats in the race have significantly higher recognition, especially Ms. Quinn, leading the pack with 64 percent approval. Even Mr. Liu, whose brand suffered a barrage of bad headlines when multiple criminal indictments were leveled at his fund-raising operation, posted a respectable 46 percent.

For her part, Ms. Thompson said her husband’s fan base is much deeper than the public polling suggests, and she expressed frustration with the stereotype of him as unenthused and inactive.

“Friends of mine, a year ago would ask me—you know, Manhattanites—‘I don’t see Bill! Is he really campaigning?’” she said. “Absolutely. You don’t see him because he’s not where you’d expect him. He’s not in the Central Business District half of the time. He’s out in streets, he’s at churches, synagogues and community centers … He’s talking to people. Not just the folks that Quinnipiac may poll; he talks to people who vote.”

Despite his second-tier poll position, and even though he trails in fund-raising, politicos almost universally acknowledge Mr. Thompson as having a genuine shot at Gracie Mansion. Indeed, as the sole African-American contender on his party’s side of the aisle, Mr. Thompson would seem to have a natural advantage in a Democratic primary electorate that boasts an even higher proportion of black and Latino voters than the city as a whole.

“I just think that there are common messages that unite communities and [they] express concerns in those areas. That’s what I talk about. Am I black?” Mr. Thompson said, pausing to examine his own hand to stress the obviousness of his point. “Yeah! But at the same point, that’s not why black and Latino communities have been supportive.”

Additionally, Mr. Thompson emphasized the differences between 2013 and his last campaign, notably the lack of an extremely wealthy, free-spending incumbent and, as he kept pointing out, media coverage that actually acknowledges his candidacy as legitimate.

“Look, I think I’m a better candidate today than I was in ’09,” he said. “I think every experience is a learning opportunity. I think there were things I learned … The perception was that Bloomberg couldn’t be beat. No matter what you did, no matter what the public [thought], no matter how strong the crowds and the response and—there were people you couldn’t convince.”

While acknowledging that there’s still a long time before the summer, when voters cast ballots in his primary, Mr. Thompson also claimed that his campaign had “turned the corner in a lot of ways” in recent days. His latest campaign finance filing showed more than $1 million raised in the last six months, and he gave a policy address in front of the pro-business Association for a Better New York in which he unveiled some proposals, including increasing the size of the city’s Police Department.

“The major criticism of you has not been your intelligence or indeed your record, but rather your temperament,” she began. “I actually think, witnessing you over the years, that your calm temperament that some people perceive as a lack of energy, has, in fact, been a plus in resolving some very tough issues.”

On stage at a Hilton Hotel ballroom, Mr. Thompson countered by claiming he only seems mild-mannered compared with the rest of the Big Apple’s political scene.

I asked Mr. Thompson if he was frustrated by all of the talk about temperament. The calm, collected former comptroller is who he is—he rhetorically shrugged his shoulders and said it has been diminishing “bit by bit.” He even predicted it’d eventually go away completely—on Election Day, if need be.

“You get used to it,” said the man who might just quietly walk over the finish line first. “Over a period of time, people will stand up and say, ‘Wow, I’ve run into him five times this week, yet he is working hard,’ I guess some of it also is when the votes get counted, and people go, ‘Damn. He won?’” 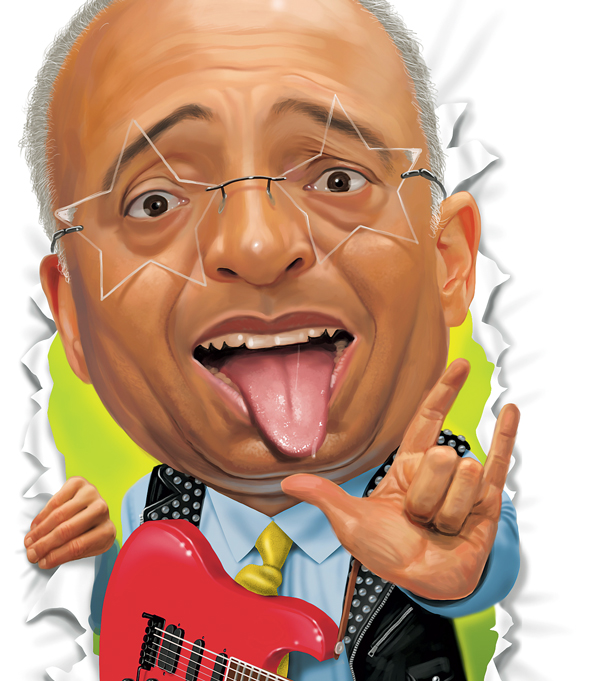