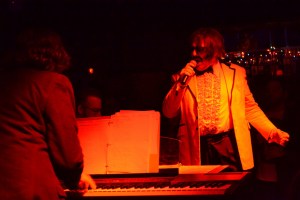 Andy Kaufman is the only other person besides Elvis Presley to continuously perpetuate a half-serious belief among the public that the rumors of his death have been greatly exaggerated. According to his official web site, Kaufman died at the age of 35 on the evening of May 16, 1984, from a rare form of lung cancer. The fact that his alter-ego, Tony Clifton, a lounge act from hell who is a perfect mix of Robert Goulet at his schlockiest and Vegas-era Elvis at his least lucid, continues to make live appearances hasn’t helped anyone rule out that his death was a hoax. In the ’70s, when Kaufman created the character, it could be hard to tell if it was Kaufman himself playing Tony Clifton, or his frequent collaborator Bob Zmuda, or someone else altogether. A lot of people thought Tony Clifton was just some ass hole washed-up lounge singer. So, Tony Clifton was Tony Clifton, a performance piece so believable that the act transformed into a live suspension of disbelief; it ceased to matter who was portraying him, or if he was fictional at all.

At the West Village nightclub Westway last Saturday night, Mr. Clifton emerged from the crowd wearing a ruffled tuxedo shirt and white dinner jacket, singing, most appropriately, Gloria Gaynor’s “I Will Survive.” He pronounced it “serveev” and was a little off key. He was performing at the after party for Maccarone Gallery’s exhibition “On Creating Reality, by Andy Kaufman.” His mustache looked fake, but the wig was pretty convincing, and the thick sideburns could have been the real thing. He stood on a catwalk-like stage in the middle of the room with a keyboardist and a saxophone player, examined the gaudy red velvet curtains and mirrored cocktail tables in the room and asked no one in particular, “What is this place, a strip club?” Then he launched into a series of offensive jokes, punctuated by some tasteful fills from the piano.

“How do you know your roommate is gay? Because his dick tastes like shit.”

“What do you call a lesbian with six fingers? Well hung.”

These jokes didn’t exactly land. He defensively assured the crowd they’d be repeating them the next day. Then he launched into Frank Sinatra’s “Summer Wind.” He was surprisingly earnest, but got a little nasally on the high notes.

He transitioned right into Glenn Campbell’s “Rhinestone Cowboy” and when he was finished offered another joke, this one exceedingly racist, which will not be reprinted here, but it had something to do with what you would “call the Flinstones if they were black.” The predominantly white art world crowd groaned and booed and Mr. Clifton started singing the chorus to “Rhinestone Cowboy” again as a distraction. He kept at it for a while.

He interrupted a Sinatra medley to talk about how he wanted “that thing at KFC with the fried chicken, but there isn’t bread because the sandwich is between the two pieces of fried chicken? The Double Down?”

The piano player reminded him that he was in the middle of a medley. He continued singing, half-heartedly.

“Fuck you, Tony Clifton!” an audience member shouted from the back of the room. Mr. Clifton demanded to see the heckler face to face. She and her companion made their way through the crowd and, as she began to climb onto the stage, Mr. Clifton yelled another string of mostly unprintable expletives and threw her forcefully back into the audience, simultaneously beating her companion in the side of the head with his fist and asking for security to escort them out of the club. Hunched over and out of breath he turned to his band.

“‘Always on My Mind,’” he instructed casually.

“Fucking fake tits trying to fuck up my show,” he said when the song was over, then performed Lou Reed’s “Walk on the Wild Side.”

This was accented with some lovely soloing on the sax.

He closed with the evening’s second selection from the musical Les Misérables: “I had a dream my life would be/so different from the hell I’m living/So different now from what it seemed/Now life has killed the dream I dreamed.”