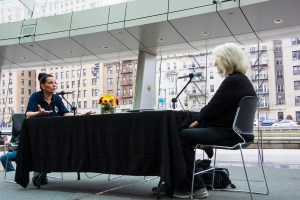 Last week, Mierle Laderman Ukeles, who is the first and, to date, only artist in residence in the history of the New York City Department of Sanitation (a title she has held since 1977), was speaking at the Brooklyn Museum’s daily staff roll call. She told the museum’s crew of maintenance workers—among them window washers, security guards and floor sweepers—that even though their work can seem boring and repetitive, what they do is “the first kind of culture.”

The Observer met with her at the museum later that day. “Here’s the museum with all this stuff,” she recalled telling the workers, “and then there’s what you do. You are culture, and your work is culture. And the endless hours that will never be done, that’s what enables us to be in an institution like this. Mopping up the garbage from yesterday. It’s safe. And the things in here are taken care of. That’s culture. What I’ve been trying to do all these years is take those things that have been behind the scenes, downstairs, things no one will talk about it, and pull them into the zone of things to look at. I’m not just saying, ‘Oh, you poor things, you’re having such a hard time, here’s a chance to let it all hang out.’ I’m saying these are important subjects.”

In the conceptual artworks she has been making for over four decades, Ms. Ukeles, who is 73, has kept her focus on people and how they live. In Brooklyn, she was preparing for a performance in which she would conduct a series of live interviews with a museum security guard, a window washer and a sanitation worker, as well as architects and city planners, asking each person a series of questions: How do you personally survive? What do you need to do to keep going? What happens to your dreams and to your freedom when you do the things you have to do to keep surviving? What keeps New York City alive? What does the city need to do to survive after Sandy?

Besides that last update, the questions are the same ones that were included on questionnaires that Ms. Ukeles handed out to visitors to her exhibitions in the ’70s. She formulated them after coining the term Maintenance Art in 1969. In her brief Manifesto for Maintenance Art, the backbone of her work for the last four decades that was written shortly after giving birth to her first child, she declared, “Everything I say is Art is Art.”

“When I had a baby, people suddenly got uninterested in me,” Ms. Ukeles told The Observer. “It was like I got put into this box of mothers with children, as if they automatically knew everything about me. This made me furious. And I became a maintenance worker. Because if I didn’t do certain tasks, the baby would die. I take care of the baby, the baby can thrive, if she’s lucky and healthy. I loved that baby, but nothing in my educated brain, nothing in my culture, prepared me for this. I got really pissed off. I thought, if I’m an artist, then I get to say anything is art. So I call ‘maintenance’ ‘art.’ If art wasn’t like that before, then it has to change. Why? Because I say so. Period.”

Her artworks at the time included spending five hours washing the sidewalk in front of New York’s A.I.R. Gallery (a champion of the era’s feminist art) and locking and unlocking the doors at the Wadsworth Atheneum in Hartford, Conn. In 1976, when New York City was on the verge of bankruptcy, she staged a performance called “I Make Maintenance Art One Hour Every Day” at what was then the Whitney Museum’s downtown location, on the second floor of a large office building on Street. She took Polaroids of the building’s 300 maintenance workers, keeping the building open after midnight so the night-shift workers could participate, and printed out labels that said “Maintenance Work” and “Maintenance Art.” She let the workers decide what to call the jobs they were doing.

The piece was reviewed by David Bourdon in the Village Voice, who suggested, tongue firmly in cheek, that the Sanitation Department could replace some of its decimated budget by saying its workers were performance artists and getting an N.E.A. grant. Ms. Ukeles decided to take this advice at face value, and sent a copy of the article to the department’s commissioner. She spent the following months touring the sanitation facilities and getting to know the people. There was talk at the time of closing the department and moving it into the private sector. Over half of its equipment was broken. It patched together garbage trucks from spare parts and employees did desk work on furniture found on the street.

“The cops would throw out their furniture and say, ‘Give it to Sanitation,’” Ms. Ukeles said. “It was crystal clear to me that all the things that pissed me off about how people didn’t see me when I was with my baby carriage, they were in the same boat. Nobody wanted to talk to them. They were blank. It was so ridiculous. You want your garbage to get off your sidewalk, then you have to pay attention to who these people are who are doing this. So I’m still there.”

Her first project as artist in residence was to go to each of the 59 sanitation districts, using a driver provided by the department, and shake hands with every worker, about 8,500 in all. This took about a year and a half. With each handshake, she offered her gratitude, saying, “Thank you for keeping New York City alive.” The Department of Sanitation has never paid her, but it does give her office space that she uses as her studio. Her office downtown is still technically “restricted” after Hurricane Sandy. It’s running on generators, and mold is a big concern. Most days, the only people in the building are security, a rewiring crew working in what everyone refers to as The Dungeon and, with a young assistant, Ms. Ukeles.

ASK MS. UKELES THE SAME questions she has asked of others in her work for so long, and she quickly grows uncomfortable. They’re not the easiest questions to answer. What does she need to do to keep going?

“Well,” she said, “my work has been focused on this for many, many years. It’s always been fraught, and a big pain in the ass. And boring. How do I deal with that? Like”—a pause—“so, what did you just ask me?”

What do you need to do to keep going?

“I need to”—another pause. “It’s a tender subject. I’m working very hard to build this thing at Fresh Kills,” the Staten Island landfill that’s in the process of becoming a park three times the size of Central Park. She won’t say much about her project there other than that it’s a permanent installation meant for public use. “I got this commission in 1989, and I still haven’t built the goddamn thing,” she continued. “What do I have to do to keep going? I have to not go crazy.”

After our interview, Ms. Ukeles talked with the window washer she would be speaking with on the day of the performance—Margaret Johnson, who lives on Staten Island, has straight black hair pulled back tight in a ponytail, speaks in a deep rasp and goes by the nickname Peggy. She has a friendly but tough, weathered face. She was told they’d have 15 minutes to speak.

On the day of the performance, Ms. Johnson was washing the windows in the lobby while Ms. Ukeles was talking to other people. After a few hours, she stopped working and sat at a table with Ms. Ukeles in front of a small audience.

“What do you do to survive?”

“I am a three-year survivor of cancer,” Ms. Johnson said. “To me, being able to get up, have a job and not be bedridden, and to have the next day, is how I survive. I was bedridden for a whole year. My husband took off work, and I had stage-four cancer. We had no income. Every day I wondered if tomorrow would come. And it did. The most fearful thing in the world is not knowing if you’re going to be here tomorrow.”

Ms. Johnson was followed by Ed Shevlin, a beefy, goateed worker with the department of sanitation who lives in Far Rockaway. He is 11 years sober and, in his spare time, a Fulbright scholar of Gaelic. When Ms. Ukeles asked him how he survives and how the city will continue after Sandy, he launched into a horror story—witnessing the hurricane’s destruction of his neighborhood. He watched his car get carried into the Atlantic Ocean. He watched two massive sections of the Rockaway Beach boardwalk—“replete with benches, guardrails and light posts”—crush houses and cars as they moved through the neighborhood atop the storm surge. He saw a light post run straight through one of his friends’ houses “like a spear.” After the storm, he used a front-end loader to dig into the three-foot-high piles of sand that had taken over the area. Transporting all the debris with heavy machinery was “like trying to empty the ocean with a teaspoon.”

“When evening came,” he said, “I’d go down to the pool in front of my building, get a bucket of seawater and put it in my toilet tank. There was no running . I’d bring a case of home from work, heat half of it up in a big stockpot, stand in the bathtub and pour it over my head. I didn’t shower for three weeks. That was the kind of maintenance I was performing.”

“Let’s end with one thing,” Ms. Ukeles said. “You have this circular pin on your collar. Can you just say what that’s about?”

“This is Fáinne Airgid,” Mr. Shevlin said. “It’s a symbol that tells people I am an intermediate Irish speaker. This means I am open to speaking in Irish with anyone. It’s a continuation of the language. People tried to eradicate the Irish language. But it’s back. It will never be killed.”