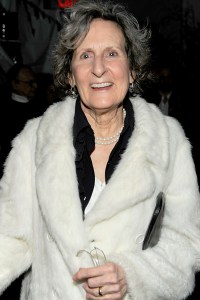 Avant-garde choreographer Trisha Brown has won the Foundation for Contemporary Art’s inaugural Robert Rauschenberg Award, a $25,000 grant endowed by the artist’s estate, Artforum reports. Though the new award is not reserved for Rauschenberg’s collaborators, he designed sets and costumes for a number of Ms. Brown’s performances starting in the late 1970s. For Glacial Decoy (1979), Rauschenberg projected black-and-white photographs of an orchid and a shattered windshield on screens surrounding the dancers, and for Astral Convertible (1989), he created jungle-gym structures and shimmering silver costumes.

Ms. Brown, who has staged gravity-defying performances on the rooftops of Soho and the walls of the Whitney Museum, is presenting a new piece titled I’m going to toss my arms—if you catch them they’re yours at the Brooklyn Academy of Music at the end of the month.