Unlike 2009 when he sought petitions toward his own write-in bid for Drumthwacket, New Jersey’s legend in a porkpie hat won’t run for governor this year.

But Uncle Floyd said he wants a contest.

“There’s nothing more beautiful than a good debate between a good Democrat and a good Republican,” the Passaic County entertainer told PolitickerNJ.com.

Uncle Floyd said he likes Gov. Chris Christie because the Republican governor reminds him of the kind of people with whom he grew up in Paterson and later in the suburbs of Bergen County.

“I’d like to go out and have hot dogs with him,” Floyd said of the incumbent Republican. “But I’m old school. I play at fundraisers for both Democrats and Republicans.”

At a recent Democratic Party event, someone with a microphone asked Uncle Floyd who he picked for president.

“I had to tell them honestly, I voted for the late Joe Ordini, who had a successful swimming pool store in Paterson,” he said. “If he could do that, in a town with a handful of pools, he could run the country.”

In a telephone interview, Uncle Floyd said he’s disappointed the politicians in Washington, D.C. didn’t bond for Hurricane Sandy relief the way the country did in WW II.

“We were a tough country once,” he said.

As for the enduring problem of Passaic River flooding in his part of the state and the community’s inability to avert disaster, “I found a Paterson Evening News from 1946 and they were appointing a commission to study why the river floods,” Uncle Floyd lamented. 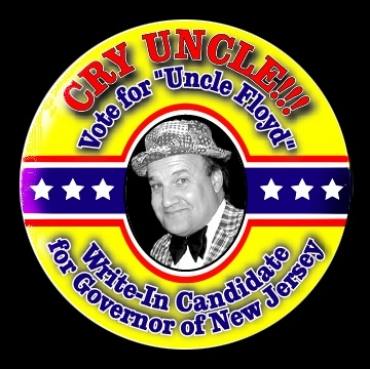