Englewood resident Christopher Gagliardi has a disability, which he’s turning into an advantage as he prepares for a run at public office in Bergen County.

An unsuccessful 2009 candidate for the Assembly in LD 37, Gagliardi this time is making a bid for a city council seat in his hometown.

The seat occupied by Councilman Wayne Hamer is up in 2014.

“I want to get a head start, which is why I’m announcing this week,” said Gagliardi, 32, a Democrat and special needs outreach coordinator for Assemblywoman Valerie Huttle (D-37).

The candidate made his initial statement of intent on FaceBook.

Gagliardi has a rare form of infantile autism, which no one else on the sitting city council has, which is one of the reasons why Gagliardi feels he can offer a different government perspective.

“I’m running to make my point about public service, and also to get a message out there that our youth are vital,” Gagliardi said. “Bullying can start as early as third grade, I know; I was bullied. We need more awareness around our kids and more concentration on their safety and peace of mind, particularly after the shooting in Sandy Hook, Connecticut.  We need more programs for our youth as a base for their future – and ours.” 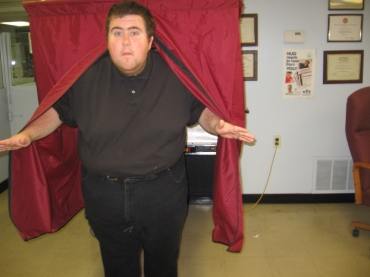