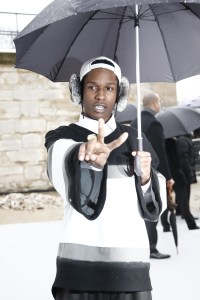 Is there any greater pleasure than when art spills over into more mainstream culture? Think of Picasso popping up in Woody Allen’s Midnight in Paris (2011) or in a Beastie Boys song (“I use the microphone like Picasso used clay” in “Alive”), or a prized van Gogh making an appearance at a charity auction on ABC’s Revenge. Now there’s another occurrence to add to that list. New York-born rapper A$AP Rocky talks art on “Phoenix,” one of the highlights of his excellent new album, LongLiveASAP (2013). The choice lines from the song:

Judging by the lines for the opening of Gagosian’s Basquiat exhibition last night, the late artist’s following is also colossal. The queue stretched about halfway down West 24th Street!

Take a listen to “Phoenix” below.